Pushes And Pulls On the Edge of an Enigma 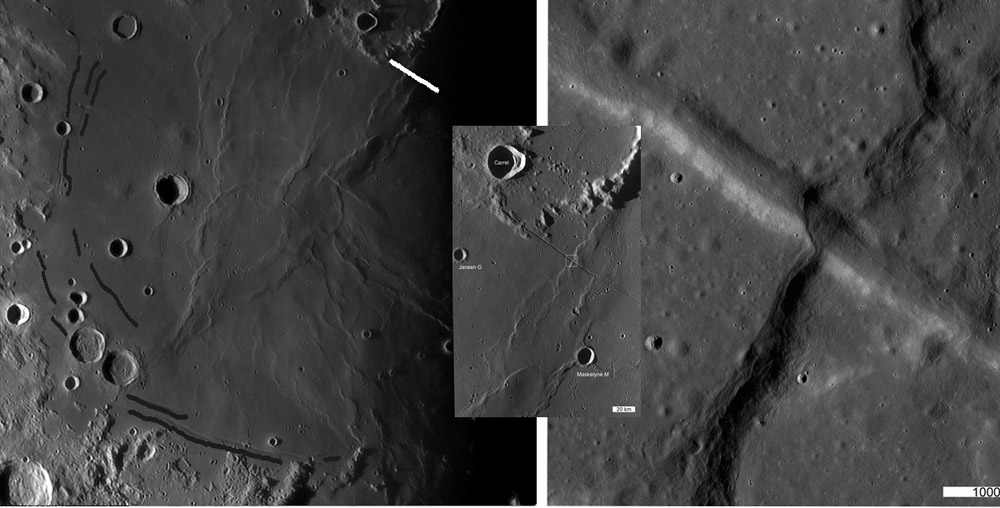 Jeff Plescia, a member of the LRO camera team, recently posted this LRO image of the intersection of a mare ridge and a rille. Dynamically, such an interaction is interesting because a linear or an arcuate rille forms in response to extension, a pulling apart of the crust. And a mare ridge is caused by compression, as forces push pieces of crust together. These two features represent opposing forces acting at 90° to each other, an impossibility if they occurred simultaneously. But they didn't because the ridge is younger since it flows into the rille. In fact, all across the Moon, rilles along the circumferences of mare basins formed before mare ridges. The rilles formed as basins subsided, fracturing the margins. The subsidence was caused by the mass of the mare material that flooded basins, and as the basin floor subsided the cold, brittle lavas were squeezed together to fit into a smaller volume, causing mare ridge fractures. The geologic setting of this interaction is more complicated though. It is not certain that the rille (shown in white in the telescopic image) is actually part of the family of curved rilles along the edges of Tranquillitatis (black lines). The basin structure in Tranquillitatis is uncertain, but if there is a basin it is only in the western half of region covered by Mare Tranquillitatis. And the mare ridge isn't a standard one for it clearly is radial to Lamont, the oval pattern of mare ridges that might mark a buried small basin inside the larger and older Tranquillitatis Basin. Hopefully, the new topographic data from LRO and the gravity data from GRAIL - and a new generation of lunar scientists - can put together a compelling picture of how all these phenomena relate.