The Evidence Piles Up 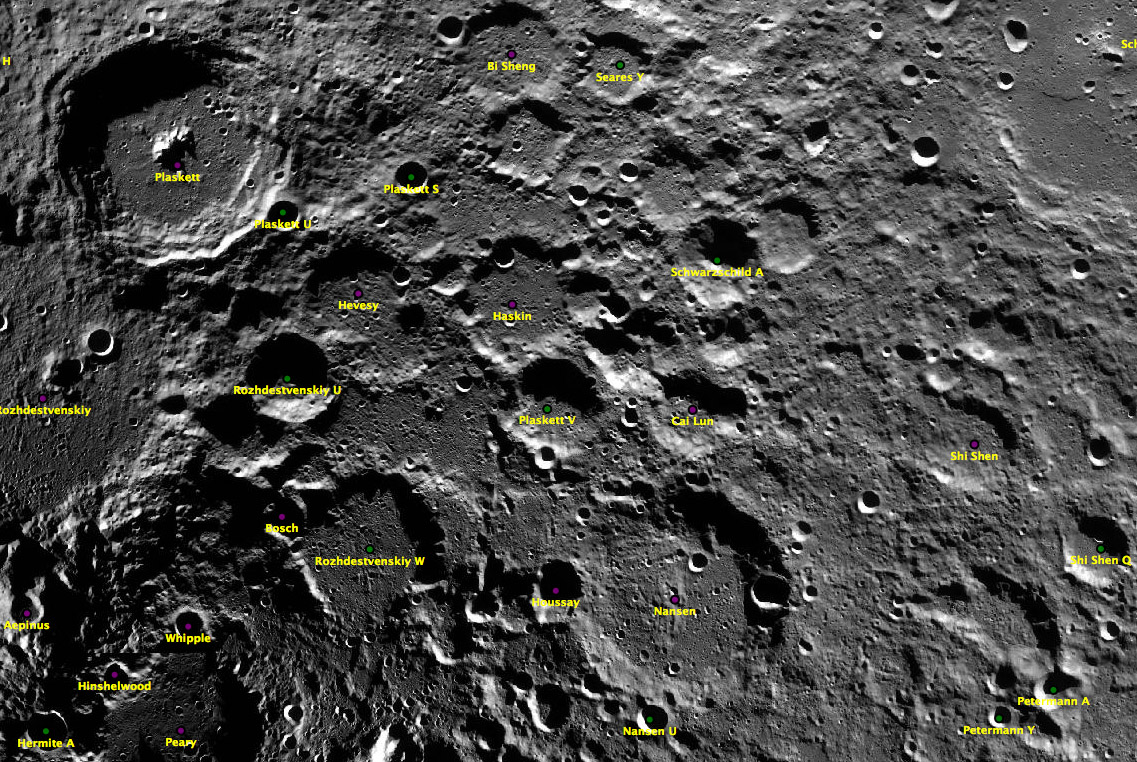 Many new discoveries are coming fast and furious so today we hop back to the LPOD of June 24 and tomorrow we will provide new information about the June 23 LPOD. And then after that we will get back to new new discoveries. The LPOD of two days ago concerned the half crater southeast of Nansen, seen here near the bottom right between Shi Shen and Petermann A. I speculated that the missing half of this feature could be buried under nearly 2 km depth of basin ejecta, probably from Humboldtianum if this conjecture was right. But I ended with suggestions that other evidence argued against that source. Here is that evidence. Notice Nansen (which we recently saw from an Earth perspective) has part of its floor covered by rough textured material similar to what is in the half crater. This material is about 1000 m thick near the left rim and thins to about 600 m before dropping precipitously to the crater floor. So this is some sort of fill that thickens away from the proposed Humboldtianum source. It still might have come from there and somehow been piled up against the rim and slid backwards. The next observation may not be relevant but there is a smooth and flat plateau between Rozhdestvensky W and Nansen - I wonder if it is related to the fill in Nansen? Finally, look at the upper right part of the rim of Plaskett. There seems to be a mound of material just outside the rim that cascaded over the rim, burying the terraces and intruding a little on the crater's flat floor. From the map tool on the LRO QuickMap you can see that this mound is 2-3 km high and has a basal diameter of about 60 km. It seems to be similar material to the rough stuff seen elsewhere, and it looks like it is on top of a relatively young crater. Plaskett was mapped by the USGS as Upper Imbrian, and the putative ejecta source region, the Humboldtianum Basin, was considered Nectarian, mappably older. If the basin didn't pile up the mound, which would be a strange way for ejecta to be concentrated, what is its origin? I don't know - nothing else seems reasonable, perhaps it was a pre-existing local high spot that partially collapsed into the crater after it formed. That would be pretty rare too. We eliminate multiple problems if we say all of this is basin ejecta and its deposition was too complex for us to completely understand 4 billion years later. Or we can be less satisfied, probably, by saying that the missing half crater, the sloping fill in Nansen and the pile on Plaskett have other, mysterious origins. I am not pleased by either option, are you?