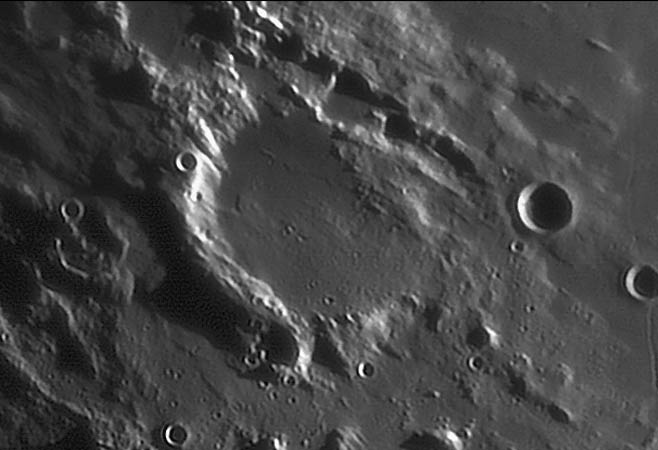 Lunar craters have not been named for political or religious leaders to avoid conflicts and confusion - imagine if there were different names for a Moslem Moon or a French Moon! But one history-making political leader does have a nomenclatural tombstone on the Moon. Julius Caesar, the founder of the Roman Empire and the sponsor of a major calendar reform (hence the month July), is the name of a 90 km wide degraded crater just west of Mare Tranquillitatis. JC is essentially the same diameter as Copernicus (93 km), but that is the only similarity between these two craters. JC had the misfortune of forming sometime before 3.85 b.y. On that date the Imbrium basin-forming mega-impact occurred and Julius Caesar was near enough for basin ejecta to swirl around its northwestern rim and even flow inside. Also, notice the four or five overlapping craters that cut JC’s northeastern rim - these are basin secondaries formed by large chunks of rock excavated and ejected from Imbrium. Within minutes, JC was transformed from a fresh, deep complex crater to a battered ruin. But the indignities kept coming. A look at JC under high Sun conditions reveals that its northwestern floor is dark - it contains mare lavas that fill a shallow spot in the ejecta inundated floor. Since then life has been pretty uneventful, for only a very few small craters cut into the mare patch.

Chuck Wood
This is a repeat of a classic LPOD from five years ago.