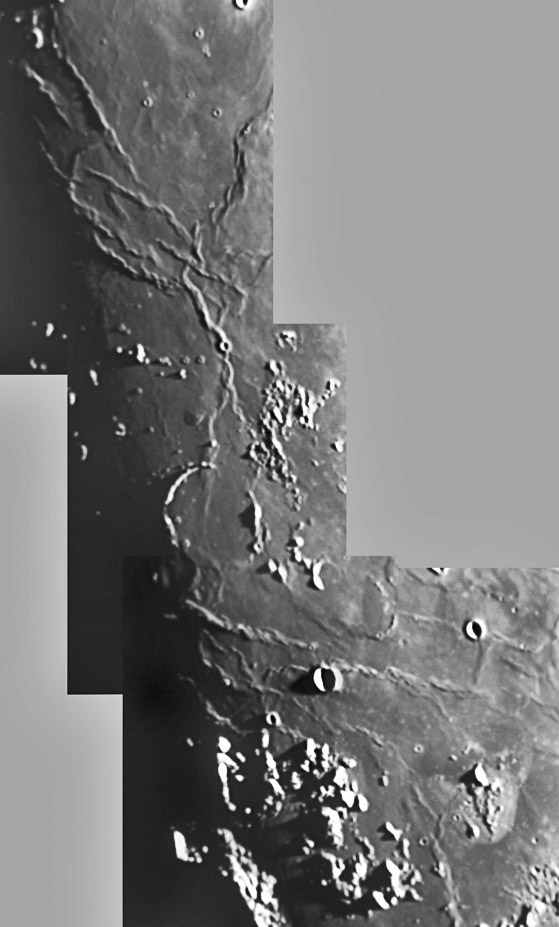 Many mare ridges mark the inner rings of impact basins. And other ridges exist for reasons we don’t clearly understand. KC has imaged sets of near-parallel ridges in southern Oceanus Procellarum that fall partially into that category. At the top left are roughly two sets of ridges that head north-northwest. These ultimately run into the bright rayed area south of Kepler and Encke and seem to disappear. At the south end of this set of parallel ridges a single sinuous ridge extends north-northeast ward, almost radial to Copernicus. Southward a simpler ridge crosses an unnamed almost ghost crater and links up with another bold ridge - Ewing Ridge - that approximately parallels the twin set above. The Ewing family of ridges extends eastward past Herigonius 100 km or so and dies out. The best explanation for these ridges is Ewen Whitaker’s giant (3200 km diameter) Procellarum Basin. The ridges near Herigonius seem to be along the 2400 km diameter ring which also passes through the Gardner Megadome Alignment and the middle of Mare Frigoris. The set of parallel ridges at the top of the image may be part of the 1700 km diameter inner ring. The existence of the Procellarum Basin is not widely supported by most lunar scientists, but tomorrow’s LPOD will show strong support - or a surprising coincidence.

Yesterday's LPOD: Make Your Own Atlas