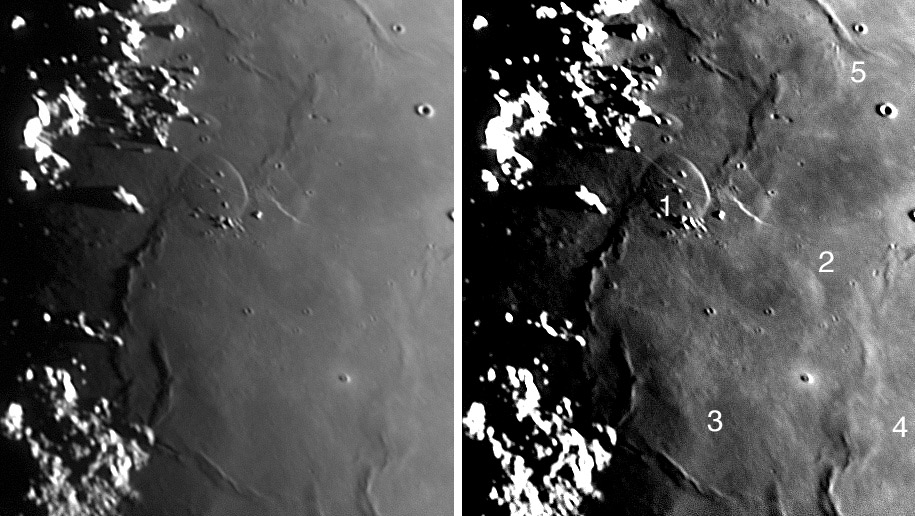 Jim Phillips often images close to the terminator, looking for domes and other features made visible by the grazing illumination. This view shows the low relief Valentine Dome (diameter of 35 km) of western Mare Serenitatis. In the right image I have mercilessly enhanced the original (with Photoshop unsharp mask) to bring out giant " rel="nofollow swells even more subtle than the Valentine Dome (1). Swell 2 is somewhat larger in diameter than the Dome, has a crisp boundary with the surrounding mare, but less steep slopes. In the enhanced view a curved line crosses the surface of 2, and a magnificent " rel="nofollow Apollo 15 image reveals that the line is a rille. With the benefit of Jim's view we can see on the Apollo 15 image that the rille is mostly contained within the swell, as is, to a lesser degree, the rille that cuts the Dome. The swell 2 rille probably formed by cracking of the mare surface that was uplifted to form the swell. And the uplift probably resulted from the rise of a batch of magma, that didn't erupt onto the surface. Swells 3, 4 and 5 are similar to 2, but less well-defined. Jim's image helps explain another mystery - why is there a fault on the mare to the east of the Valentine Dome? The very high resolution Apollo image clearly shows the fault, but doesn't hint at the small swell that the fault is mostly limited to. In this case the uplift resulted in a vertical rupture of the surface rather than a horizontal one as at swell 2. One final feature of interest. Between 1 and 5 is a delicate and narrow curved dimple that extends toward the south about 80 km. The mare surface appears more highly textured to the left, and smoother to right of the dimple line - is this a boundary between two lava flows?

Note: You can leave comments about this LPOD by clicking on the"Discussion" tab above.