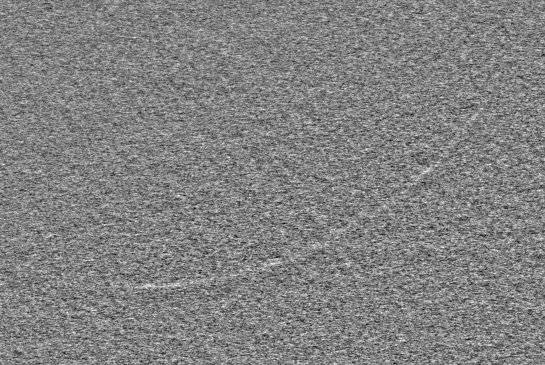 image by Martin Elsässer The Moon at 5.0° elongation from the Sun, 3 hours 27 minutes after New Moon.

Thin lunar crescents are hard to see, and the closer the Moon is to the Sun, the harder they are to see. In the 1930's the French astronomer André Danjon noticed that not only does the crescent get thinner and dimmer, but the length of the crescent appears to decrease as well. Danjon interpreted this as an effect related to the roughness of the lunar terrain: it was if the shadowed side had a larger diameter than would be expected for a smooth sphere, and this added ring of darkness ate first into the horns of the crescent and then into the crescent itself. By plotting all the visual observations he could find, he concluded that the length of the crescent should go to zero -- that is, the crescent should vanish entirely -- whenever the Moon is seen closer than about 7° from the Sun. But it has never been clear if this widely quoted "Danjon Limit" is truly an intrinsic property of the Moon or merely a statement of the limited ability of our eyes to perceive a thread-like streak of light against the increasingly bright twilight sky in which the thinnest crescents are typically viewed. Early observations from rockets sent above the Earth's atmosphere suggested that the problem was largely perceptual: vestiges of a crescent could reportedly be photographed at "elongations" from the Sun of as little as 2°. But little has been heard since about the visibility of thin lunar crescents from space.

Now Martin Elsässer and friends have begun exploring a new technique for determining from Earth what the Moon really looks like under these extreme crescent conditions. Trekking from their Munich home to the clear skies of the nearby Austrian peaks, using a baffle to block direct sunlight from their telescope, and imaging in the infrared (where the intensity from the blue-scattering mountain sky is lowest), they have not only been able to find lunar crescents at mid-day, but to see them much closer to the Sun than has ever been done before from Earth. Unlike the conventional twilight crescent observations at visible wavelengths, in which the thin crescent is only visible when the Sun is below the horizon, and fades from view as the Sun rises; observations by this new technique are actually helped by the Sun and Moon being as high in the sky as possible, where conditions are likely to be most clear -- and thin crescents, if present, can be observed all day! The extreme crescent shown above clearly demonstrates that the crescent does not actually disappear. The elongation here was just 5.0°, much below the Danjon Limit, yet with careful image processing Martin was able to tease his prize from the background noise under less than ideal conditions -- the Moon was only 35° above the horizon. The one below (elongation 5.2°) is slightly clearer, in part, because, 45 minutes later, the Moon had climbed into the clearer air a little higher above the horizon.

Because in some months the Moon is always 5° or more from the Sun (even when "New"), it's clear from Martin's work that an infrared-eyed observer might never entirely lose sight of the slender crescent. Martin is telling us not only that the true limit of lunar illumination is not where Danjon put it, but also that we are going to have to rethink what we mean by things like "the first sighting of the New Moon".

Editor's note: This description of Martin's work was supplied by the-Moon Wiki member Jim Mosher. Chuck Wood will be back tomorrow.

You can support LPOD when you buy any book from Amazon thru LPOD!