A Beacon in a Corridor of Murkiness 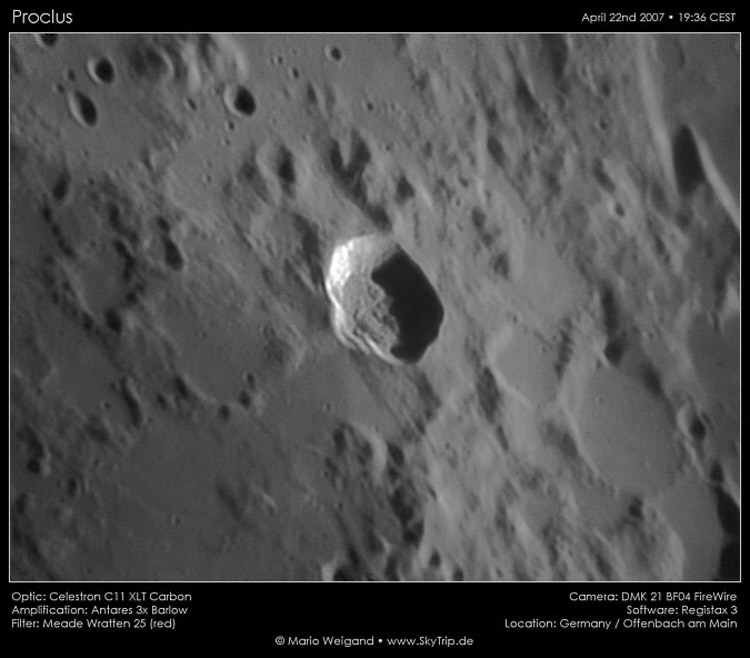 I like this image because it is so unusual. LPOD has received only a handful of closeup images of Proclus, and the lighting on this one makes it looks like a beacon in a sea of murkiness. There is actually a complex history here - like most places on the Moon - giving rise to a variety of terrains. The simplest story appears to be that Proclus is sandwiched in a corridor of lightness separating dark material to the east and west. The edge of Mare Crisium is just visible to the east/right, with the O'Neil's Bridge area innocuous near bottom right. West of Proclus is another dark area of completely different character. This is Palus Somni, a region that is accidentally dark, being not dusted by ejecta from Proclus. The lighter gray area of most of the rest of the image looks like it has been veneered by snowfall, but really it is just a homogenous coating of Proclus' bright ejecta. The low lip of the nearside of the rim of Proclus is evidence of the crater's formation by low oblique impact, with the down range area frosted by bright pulverized ejecta, and the darkness of Somni being a zone of avoidance.

Tomorrow's LPOD: No Longer A