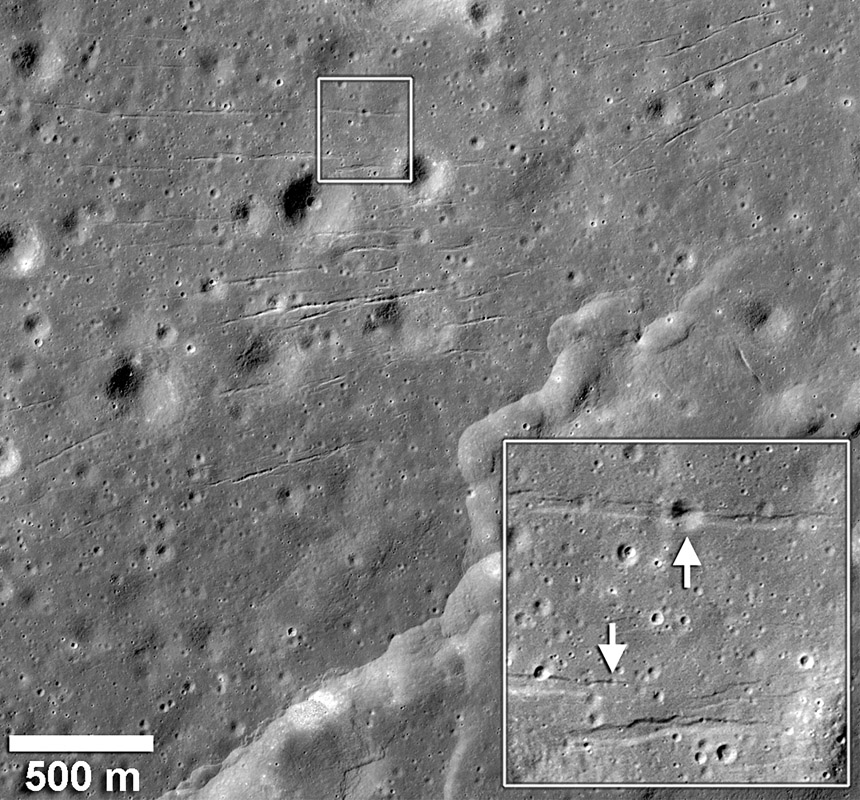 image from NASA/GSFC/Arizona State University/Smithsonian Institution by way of Space.com

Is the Moon not entirely dead? Since Apollo the evidence has been compelling that the Moon had ceased volcanic activity by 1 b.y. ago, and that most tectonc activity stopped about 3 b.y. ago. That sounds pretty dead. Back in the 1980s Alan Binder and coworkers discovered very small thrust faults on high resolution Apollo Panoramic Camera images that demonstrated that the Moon was contracting. That was consistent with a cooling and shrinking Moon that was originally totally molten. It was tectonics, but it wasn't active tectonics in the sense that increasing heat caused the contractions; it was decreasing heat, the last gasping breathe. But now the hyper-resolution Narrow Angle Camera on LRO has surprisingly imaged graben - pull-apart troughs that are due to expansion. Graben could form due to global processes such as a hot planet that is expanding, or graben can be local due to an isolated uplift over a dike or a pod of rising magma. Perhaps the most surprising aspect of these newly discovered fractures is that Tom Watters and coauthors of this new study believe that the graben are young, perhaps continuing to form now. These observations cast doubt on the originally molten Moon idea, but the thrust faults are still there. This is not your grandfather's Moon. This is new, like last year's evidence for water in the lunar crust, and it tells us that there are still fundamental things we don't understand about the Moon. Too bad we aren't going back.


Yesterday's LPOD: He Left His Footprints Among the Stars

Tomorrow's LPOD: Was Aristillus Formed by an Oblique Impact?