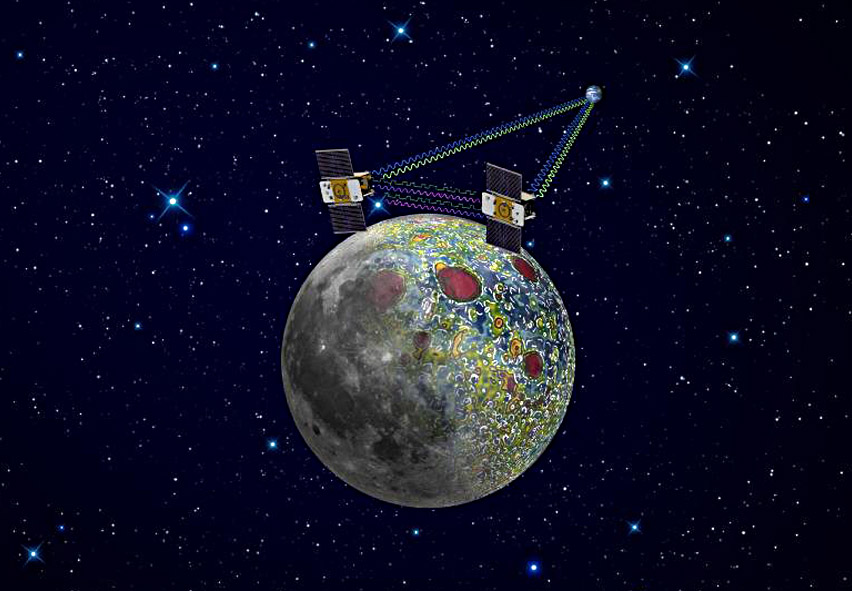 The pale blue dot at the apex of the triangle at upper right is Earth. It is receiving radio signals from twin spacecraft now orbiting the Moon. The half painted Christmas ornament in the middle is the Moon, with the red patches representing strong gravity fields or mass concentrations. Mascons were discovered accidently in the 1960s when Lunar Orbiter spacecraft deviated from the orbits they were expected to follow. JPL scientists realized that excesses of mass in mare basins, compared to their surroundings, gravitationally tugged at the Orbiters, distorting their orbits. The problem with measuring gravity this way is that very precise measurements are necessary, and that the spacecraft has to be in radio contact with Earth, which is impossible when it is over the farside. Impossible with just one spacecraft, so the Japanese Kaguya mission included two smaller satellites to relay radio signals to Earth. Now, with the two GRAIL (Gravity Recovery and Interior Laboratory) satellites that entered lunar orbit in the last two days lunar gravity will be measured 100 times more accurately for the near side and 1000 times better for the farside. The GRAIL principal investigator Maria Zuber of MIT believes that with this level of precision we will learn the size of the lunar inner core and if any of it is still molten. We will also map the gravity fields of basins and craters at a level commensurate with the LRO imaging and topography, providing three-dimensional maps that extend deep into the lunar crust and mantle. It takes 3 more months to lower the spacecraft into their mapping orbits, but this spring LPOD should be able to display unparalleled views on the inside of the Moon. Thanks, Maria!