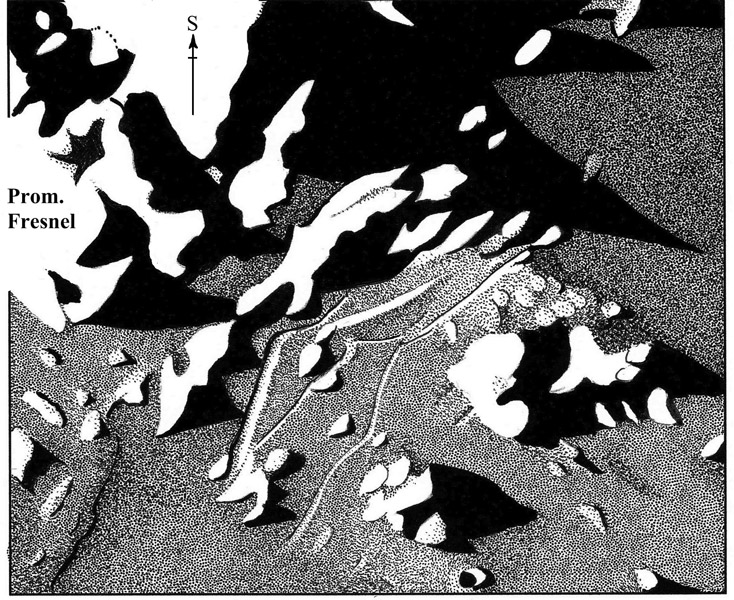 This interesting system of three roughly parallel rilles know collectively as the Rimae Fresnel are situated just to the west of the Prom. Fresnel at the northern terminus of the Apennine range, and seems to have been largely overlooked by most amateur lunar observers in the past. The most intriguing of the trio is the Rima Fresnel I, which is located closest to the Prom. Fresnel. This rille is the easiest to observe being the widest and deepest. But at its mid-point it opens up into a large rectangular lava-filled lagoon, with the north-western bank of the rille left standing on its own and looking like a mini Straight Wall, with the scarp face appearing very bright in the early morning light at this colongitude. Further to the north-west Rimae II and III are fainter and appear to link up to the south, as they approach the Palus Putredinis. Rima Hadley also appears to join the pair at this point, though finding a definite link is somewhat difficult due to the lava flooding. Both Goodacre and Wilkins show the wider Rima Fresnel I continuing strongly northwards along the western shore of the Mare Imbrium towards the Montes Caucasus, but I have always found this lava-buried section of the rille difficult to find, except under the most glancing of illumination.

Tomorrow's LPOD: Beyond the Past