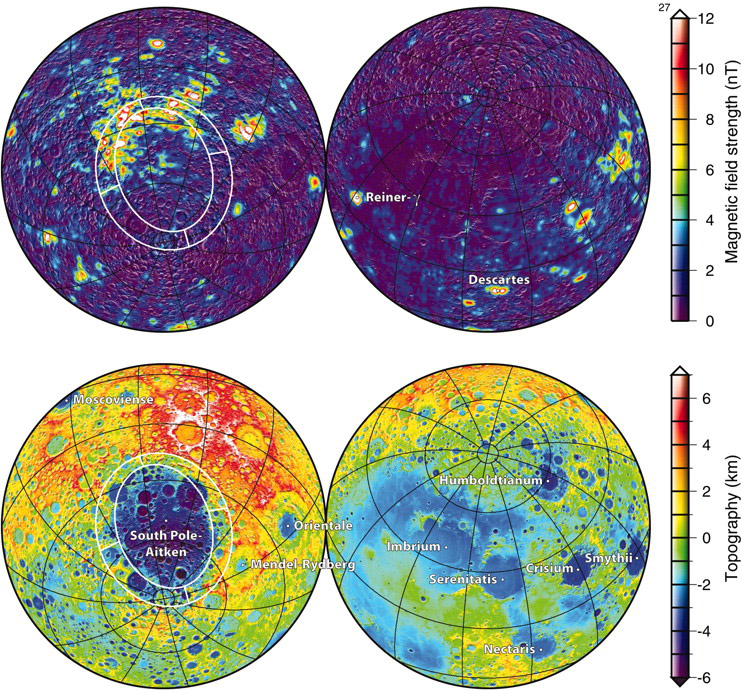 images from Mark Wieczorek and colleagues, Science. Top view shows near and farside hemispheres magnetic field from Lunar Prospector, and the bottom pair is topography from LRO altimeter. The white ellipses mark inner and outer boundaries of the South Pole-Aitken Basin.

The Moon has no global magnetic field but does have a number of localized patches of magnetism, most famously associated with the Reiner Gamma swirl. Although some exotic mechanisms have been proposed to explain the magnetic concentration (magcons), none has been completely accepted. Now Mark Wieczorek and colleagues have a new idea. They noticed that many of the lunar magnetic anomalies are near the South Pole-Aitkin Basin and thus may be ejecta from the giant basin. A problem though is that lunar material has little metallic iron and thus can become only weakly magnetized. But if the projectile that smashed into the Moon to form the giant basin were iron-rich it would be mixed into the ejecta and could become magnetized as it cooled, if a global magnetic field existed then. Many meteorite types have significant metallic iron so that the planetismal that hit the Moon 4.4 or so billion years ago may have too – it could even have been the equivalent of an iron meteorite. By this interpretation magcons are places where iron-rich SP-A ejecta landed and as they cooled were magnetized by an early lunar magnetic field. Computer simulations by Mark and friends show that a 200 km wide impactor hitting the Moon at 15 km/sec at a 45° angle could explain the observed distribution of magcons. The projectile would have come from the south, in agreement the rough north-south elongation of the SP-A Basin and the concentration of magcons to the basin’s north. This is a nice study but one of the nearside’s strongest magcons follows the Sirsalis Rille. This anomaly was previously interpreted as the magnetic signature of a vertical dike that caused the rille. It is hard to accept that the matching of the Sirsalis magcon with the rille is a coincidence, or that the formation of the SP-A had anything to do with the much younger rille. But this new idea is exciting and may ultimately explain the Sirsalis Rille magcon and many other oddities of lunar magnetism.