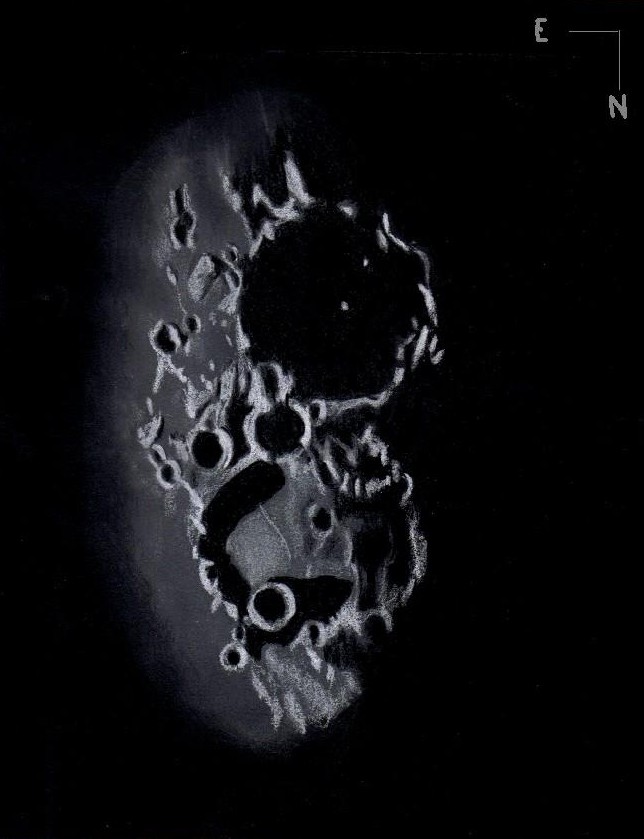 Close to the visible center of the lunar near side are the north-south crater pair Hipparchus and Albateginius. On this evening they were on the sunrise terminator. Hipparchus at 150 km in diameter is the largest and oldest of the pair, dating from the pre-Nectarian period (4 billion years ago). Inside the northeast rim of Hipparchus lies crater Horrocks (30 km.) with its bright rim and the deep dark center. Just beyond the Hipparchus crater rim to the southeast is the young, small (15 km.) crater Pickering, also with a well illuminated rim. Near the center of Hipparchus crater Hipparchus X is visible and between it and Horrocks one of the small narrow rilles was easily seen which is parallel to Rima Reaumur lying out beyond the Hipparchus rim to the northwest (not sketched). Between Hipparchus and Albateginius are the old craters Halley (37 km.) and Hind (31 km.). Most of the rim of Albateginius (139 km.) is brightly illuminated by the sun as are two high points within the "well of darkness". The illuminated point closest to the center is the top of a central peak. The other bright point closer to the rim is the high point on the margin of crater Klein (44 km), sitting in darkness. At the beginning of the sketch these two points were not visible but appeared about 45 minutes after I started. I tried to picture in my mind what the view would be like if you could stand on either of these high points and look out and down. Wouldn’t that be a sight!

Tomorrow's LPOD: When Maria Are Bright