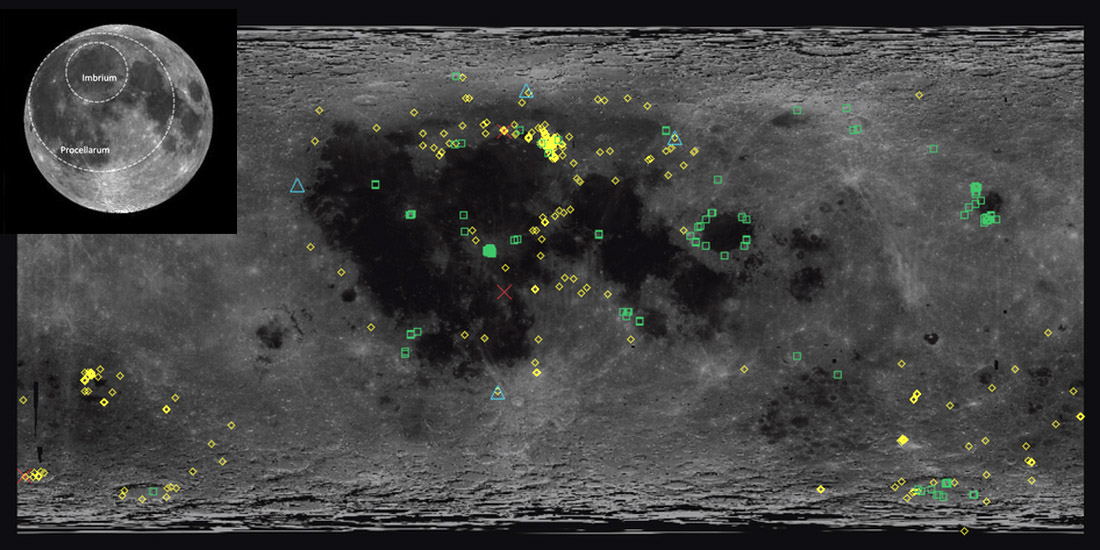 map from Nature Geoscience, with insert from National Institute of Advanced Industrial Science and Technology, Japan

The largest proposed feature on the Moon is the Procellarum Basin, a 3000 km wide impact basin which would have formed in the earliest period of lunar history. Thirty-one years ago Ewen Whitaker proposed the existence of the gigantic feature because the curved western shore of Oceanus Procellarum looks similar to many other basin rim/mare fill contacts. He noted that mare ridges in Procellarum define possible inner rings of the basin, and that the north shore of Mare Frigoris lies on the continuation of the main rim. Few lunar scientists have looked favorably on that proposal but now Japanese scientists have detected evidence to support the idea. Using spectral mapping data from the Kaguya orbiter, low-calcium plagioclase (LCP - yellow diamonds on map) has been identified inside young craters around the edges of the South Pole-Aitken and the Imbrium basins. Japanese scientists propose that the LCP minerals were created by melting of a mixture of crust and mantle rocks that were excavated and melted by the impacts that form SP-A and Imbrium. Later craters impacted into the LCP-rich rocks accounting for their distribution around the basin margins. As the map above shows LCP exposures also occur around the edges of the proposed Procellarum Basin, adding evidence that it actually exists.

Technical Details
Green squares are olivine-rich rocks, and the red X's and blue triangles are LCP rich, just like the green squares.