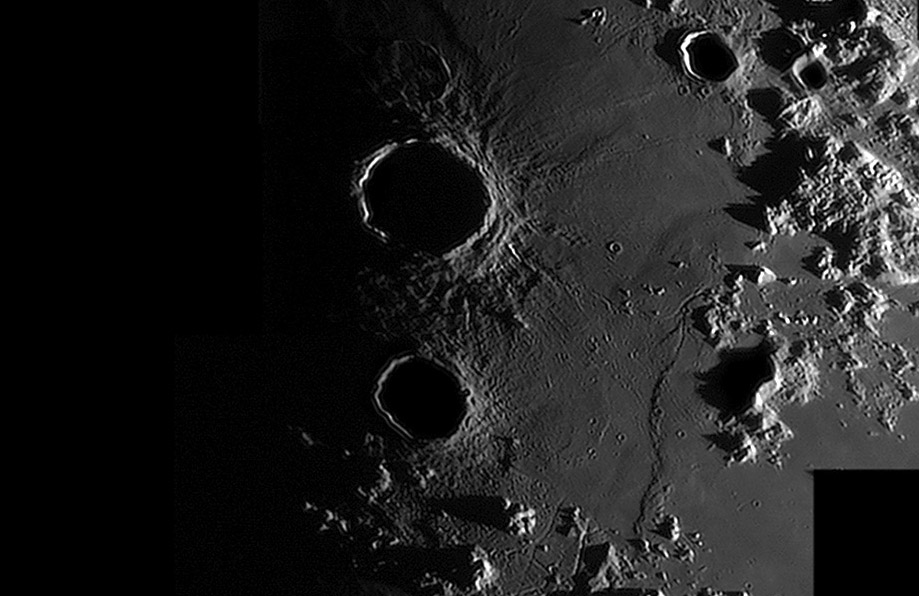 When looking at Raf's dramatic image I notice a number of intriguing geologic features. First is the buried continuation of the Fresnel Rille at bottom center under the lavas to its north. The straight edge of the textured terrain south east of shadowed Autolycus suggests that the lava-covered region subsided along a fault, but the lava isn't too thick otherwise the rille would not be visible at all. Another intriguing feature is the flattened mound of older lavas that the Theaetetus Rilles cut. This mini-plateau is bounded on the west by a curved falloff in elevation marked by a partially shadowed shallow slope. Or perhaps the shadow is just the eastern slope of a gentle trench. Perhaps a detailed look at LRO atimetry data will reveal what is really happening here. A third intriguing feature is the secondary crater chain from Aristillus that passes south of Theaetetus. The craters near the end of the chain touch each other, very much like the much larger basin secondary crater chains on the west side of Orientale. Such continuous secondary crater chains is not the way most chains are, but some are, including this one. These and other features do attract attention but the best thing about this scene is its classic, emotional power. This is the Moon we love to observe.


Yesterday's LPOD: And the Walls Came Tumbling Down