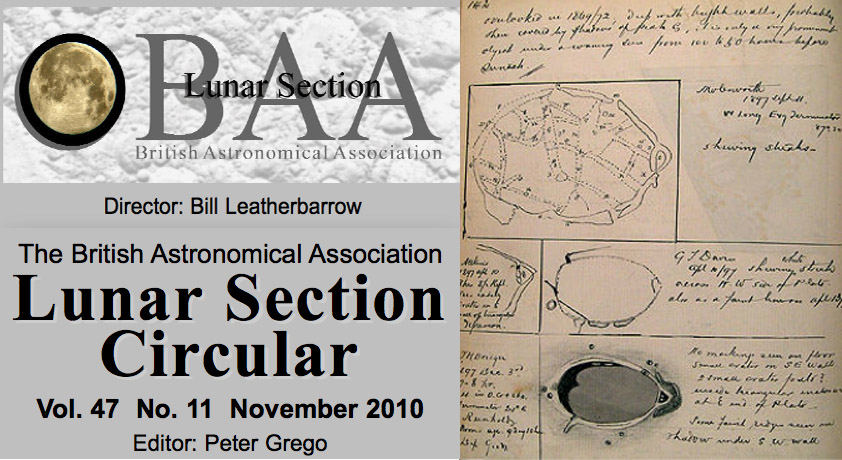 The British Astronomical Association may be the oldest astronomical society that continues to publish observations of the Moon. I have odd items from some of the variously named lunar publications of the past: the 4th Report of the Section from 1899 and a few scattered copies of The Moon from the 1960s; In fact, a few of my observations were published there. Because of this long and wonderful history I was very pleased to read in the current Lunar Section Circular, Bill Leatherbarrow's report that the Section is making an effort to collect and digitize past and current observations as a way to preserve them. I heartily support this project and encourage anyone with historic drawings to send scanned copies to Bill. I also hope that this digitized history will be shared online, just as the recent issues of Circular are. Preservation without easy access is of little use. I am reminded that a complete set of microfilms of the Selenographical Journal from the 1870s exists, but they were not easily available and thus that valuable record of an early period of British selenology was unknowable by any but a select few. But once the Journal issues appeared online they were and are immediately available for anyone to savor and study. Bill mentioned that the Section has very little of the work of Walter Goodacre, a long-time Director. I know where part of his files are - at the Lunar and Planetary Institute in Houston. Thirteen years ago I discovered them in LPI's special collections and photocopied some pages. The prize is a notebook labeled, The Moon - Observations, Notes and Sketches. November 1897-8- to. The latest listed observation is from about 1904 so this documents Goodacre's early years. I did not see other volumes of his work through the 1920 and 30s, but there were letters from and to T.L. MacDonald, who followed Goodacre as Director. I would love to see this collection be placed online, as well as all the other early to more recent BAA lunar reports - what a collection that would be!


Yesterday's LPOD: A Basinful of Features

Tomorrow's LPOD: Is It or Isn't It?