After And After; No Before 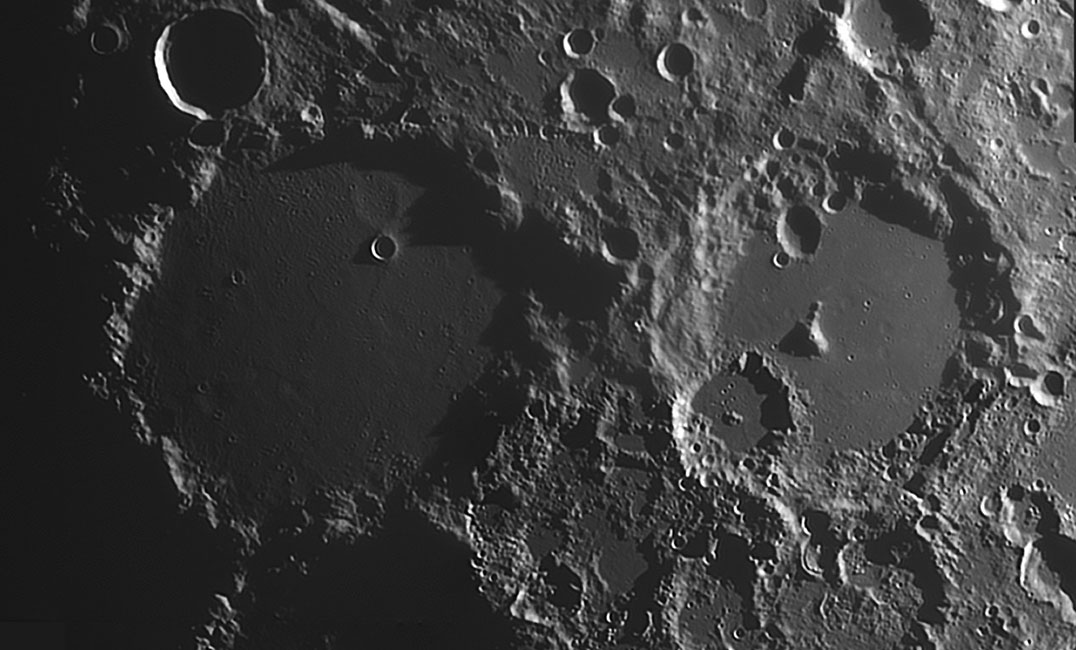 We have seen these two separately recently, but looking at them together invites comparisons of processes and modifications. Ptolemaeus (on the left) and Albategnius are both large complex craters. With diameters of 158 and 131 km, they both should have initially looked pretty similar to 131 km wide Langrenus. Each would have formed with a towering series of terraces drop- ping from the crest of the raised rim down about 4.5 km to a broad flat floor, with a cluster of peaks near the center rising 3 to 3.5 km above the floor. The two craters here look quite different from the Langrenian ideal, most notably they are not as deep and consequently their floors are broader than for a fresh crater. Ptolemaeus is most strongly modified, its floors being so filled with Imbrium ejecta and other materials that its central peals and all of its terraces are buried. With a depth of 2.4 km, the filling is probably 2 to 2.5 km thick. Albategnius is much deeper (3.5 km) and consequently more of its walls and its most massive central peak are still visible. Seismic shaking (from the Imbrium formation and the later crater Klein on its rim) jumbled most of the terraces but some remnant structure is hinted at on the southeast wall. And the peak is still visible because its initial 3 km height is only half covered by crater fill. The fact that the peak is off-center always seems suspicious, but the peaks of Copernicus would look nearly identical if filling reduced that grand crater's depth by about a half. When ever you observe an older, battered crater, also look for a fresh one of about the same diameter and see if you can figure out what processes explain the modifications of the older ones.
Chuck Wood


Yesterday's LPOD: Not in the Textbooks

Tomorrow's LPOD: Page One of a Lunar Alphabet Book