Things That Go Bump in the Night 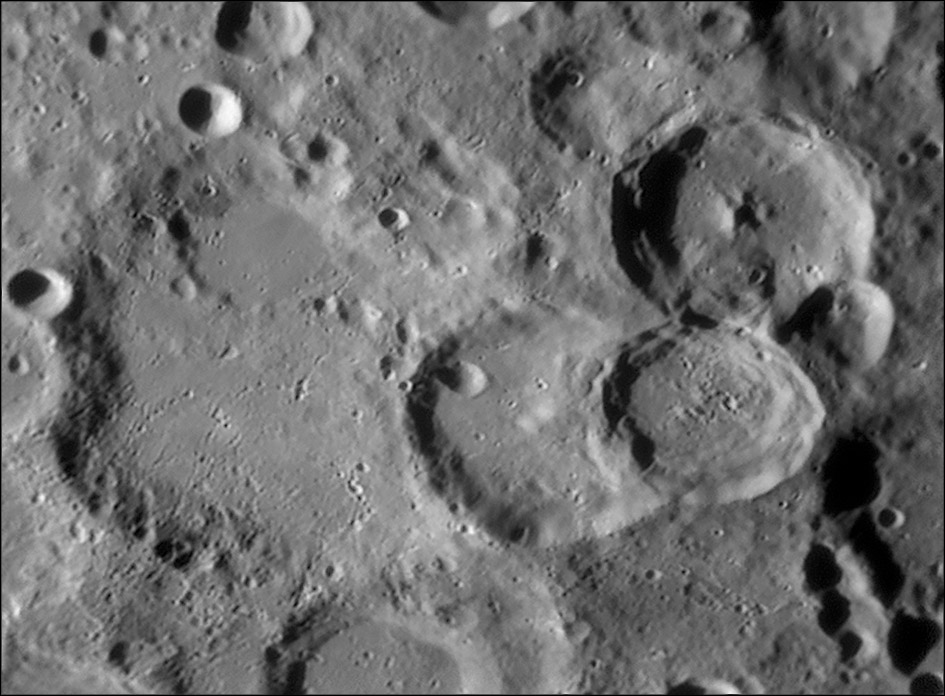 Take one glance at this image. What three things seem strange?
All the tones looks right, being bright or shadowed just where expected, except for one half-dark patch at the top of the flat-floored crater Orontius F in the upper-left quadrant of Stefan's wonderful image. Apparently this piece of the crater floor is tilted just barely away from the Sun so that discontinuous patches of shadow form. A similar tone occurs on the eastern exterior rim of Sasserides A just at the center-left margin of the image. Look again at the image for another anomaly - squint your eyes if it helps to minimize details and just see patterns. Do you notice how the floor of Orontius F is much smoother than other nearby floors? It has far fewer of the Tycho secondary craters that pelt this area. In fact, a circular part of the top of F's floor has no pits at this resolution. It would be tempting to propose that the smooth piece of floor has been emplaced more recently that the secondaries, but that means it would be younger than about 900 million years, Tycho's formation age. Such a claim requires stronger evidence than we have here. Finally, take one more look around for something slightly odd. See the two small connected oval masses on the outer west rim of Nasireddin where it overrides Huggins? These are just landslides that are distinctive for their small size and the bright edges of the rim they pulled away from. They are versions of the larger landslides that flowed into Miller and Huggins.

PS - Thanks to Raffaello Lena, Jim Mosher, Tom Pope, Henrik Bondo, Richard Handy & Martin Elsässer for contributing LPODs while I was on a Death Valley field trip comparing dunes, rivers, mountains and lakes there with ones on Titan. And thanks to Jim Mosher for coordinating the contributions to LPOD and improving the index page! I think this is a good model to follow when I'm next away - which will be in mid-March for the Lunar & Planetary Science Conference. Start planning your LPODs!