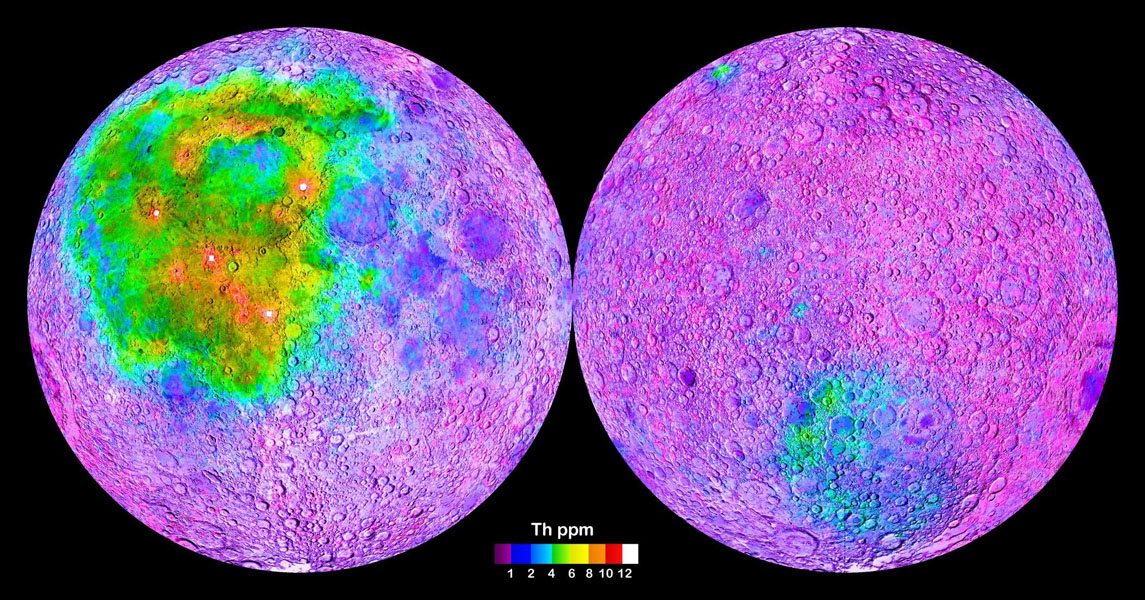 Ask almost anyone and they will tell you that there are two terranes on the Moon: maria and highlands. But that is not what some lunar scientists say. Based on data from the Lunar Prospector spacecraft, two new terrane types have emerged, and one of the traditional ones has largely disappeared. The concentration of the radioactive element thorium (Th) is very low nearly everywhere on the Moon except over a broad area of the nearside, now called the Procellarum KREEP Terrane (PKT), and within the floor of the South Pole-Aitken Basin (SPA) on the farside. Thirty-five years ago examination of the Apollo lunar samples revealed an unusual material called KREEP that was high in Potassium, Rare Earth Elements and Phosphorus. Rare Earth Elements do not easily fit into the atomic structures of most common lunar minerals, they probably were left over from the magma ocean that occured when the Moon formed. Thorium is also related to KREEP, so the Prospector Th map is interpreted as a KREEP map. No one knows why KREEP is concentrated in the north-central nearside of the Moon, but its distribution is almost exactly within the area earlier identified by Ewen Whitaker as the Procellarum impact basin. One key observation is that the Imbrium basin ejecta -near Sinus Iridum and south of Imbrium - is very high in Th, suggesting that Imbrium excavated into a KREEP-rich layer. But we don’t know if the KREEP was a type of early volcanism that erupted onto the floor of the Procellarum basin or was concentrated within the lunar crust or upper mantle. Nevertheless, the high radioactivity associated with PKT is probably related to the massive lava outpouring in this quadrant of the Moon. Note that the mare deposits outside the PKT (all the eastern maria) have Th abundances similar to the highlands. Although these maria have more iron and other elements than the highlands, in terms of Th they are nearly the same. From the observer’s point of view the PKT hardly exists, but maybe it did have an observable affect. By far, the majority of sinuous rilles occur within the PKT - were the magmas there hotter and perhaps more fluid and better able to construct lava channels and tubes?

Technical Details:
I thank Paul Spudis for the use of the Th map on his website.