Difference between revisions of "February 6, 2011" 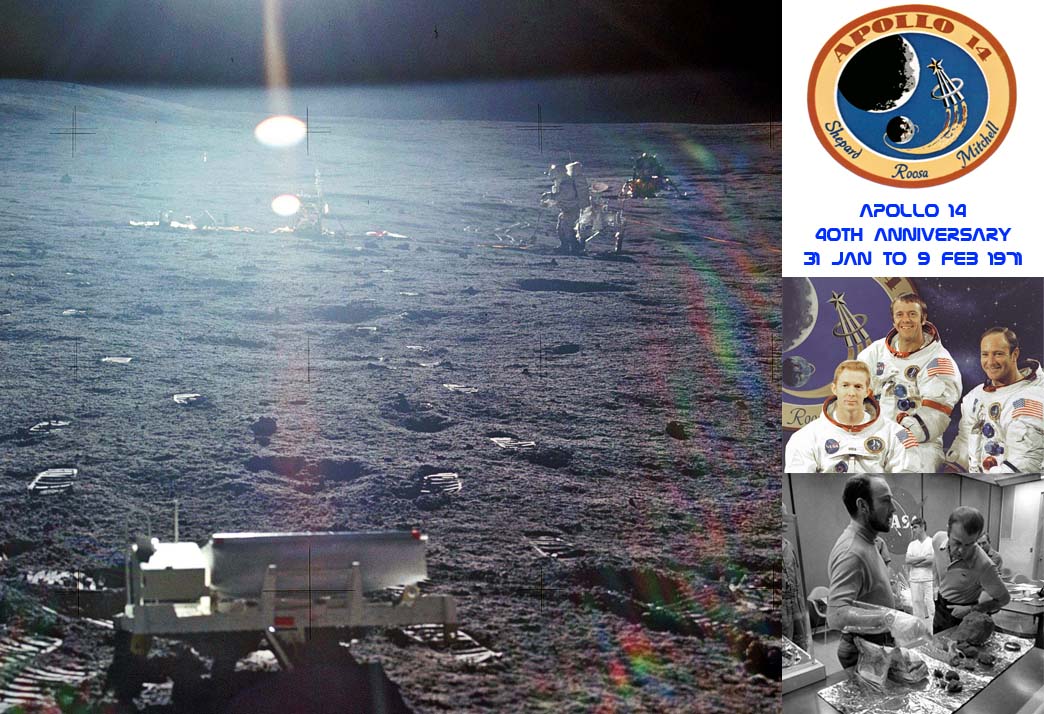 Today marks the 40th anniversary of the Apollo 14 EVA-2, the walk to Cone Crater at Fra Mauro landing site. The astronauts Alan Shepard and Edgar Mitchell set out on the longest walk in space history, up the slopes of Cone Ridge in very undulating terrain. The morphology of the landing site was much rougher than it looked in Lunar Orbiter photographs the crew had for maps. While they were never lost in the real sense of the term, in order to satisfy the lunar geologists on the ground they were required to sample at specific known stations for the samples to be most useful. Determining these positions on the rolling, atmospheric less Moon where distances were very deceiving prove very time consuming - time that the life support backpacks could not provide. Also they were towing the MET - a hand tool cart with all the gear they would need. The low lunar gravity made it somewhat unstable over rocks, though it was a very useful device that they did not want to leave behind. Even with a 30 minute extension there was not time to spend hunting for the goal - Cone Crater on the summit. In fact they were walking parallel to the rim of Cone and almost going beyond it without knowing - something that would probably not happen today with LRO image maps of the surface. A decision was made to sample boulders near the expected rim and take that as the sampling Station, which turned out to be the correct decision with rocks from deep below the surface being in the boulders sampled there. They then headed back to the lunar module covering the distance downslope quite quickly. The EVA was about 4 and a half hours and covered a distance of 9000 feet (2.7km). They returned 43kg (100 lbs) of lunar rock, a new record at the time, deployed the second true ALSEP geophysical station and achieved all of the scientific goals of the mission. Apollo 14 was also the last time a long Moon walk would be conducted on foot - the next three missions using the lunar rover - and is still today on record as the longest Moon walk in history. Their two EVA's totaled just over 9 hours, a record at that point in the space program also.