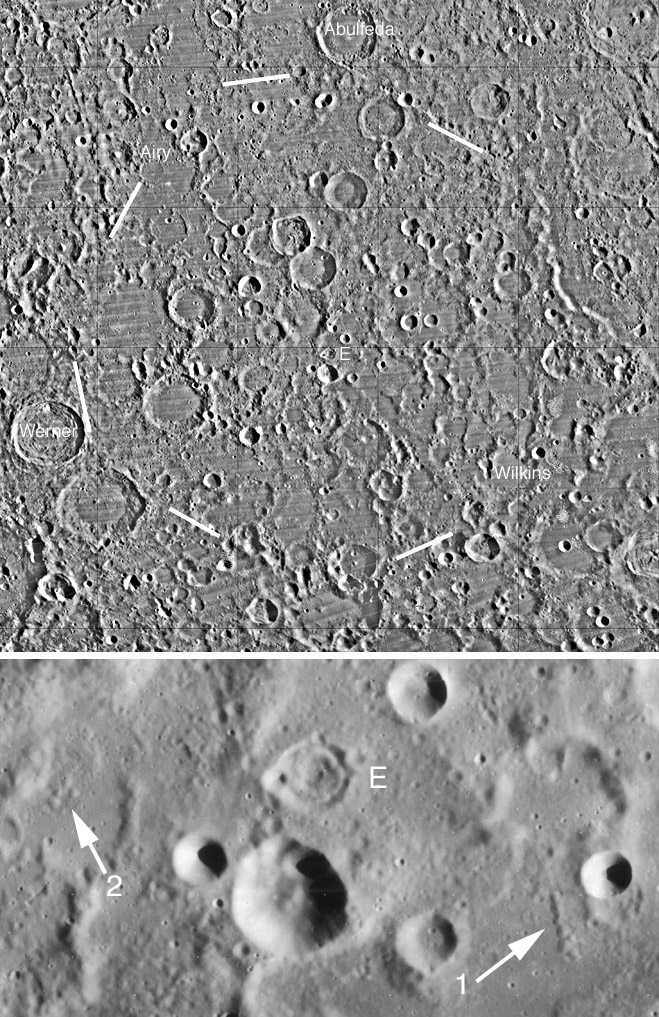 both images from Lunar Orbiter IV

Yesterday’s LPOD featured a concentric crater and possible dome that were remarkable for being in the highlands. The crater, Pontanus E, is just to the left of the “E” near the center of today’s top image, and is also seen in high resolution in the lower image. The origin of the inner rings of concentric craters is uncertain, but their normal association with maria suggest they are somehow igneous. To the north of Pontanus E, within the crater Azophi G, is a domical hill whose origin is also indefinite, but is similar to volcanic lunar domes that occur in maria. Today, two more features are added to the inventory of likely volcanic features in this area. Arrow #1 points to a remarkable straight alignment of seven hemispherical hills. It is difficult to imagine a scenario that would explain these by impact processes, but an eruption of viscous volcanics along a fissure is a possibility. The second arrow indicates a cluster of four similar rounded hills, that must be candidates for a volcanic origin, if the straight string of seven are. These two groups of domical hills, added to the concentric crater and the Azophi G hill, suggests that this is an extensive area of highland volcanism. Why? Why would there be non-mare volcanism in this particular area of the highlands? The answer may be provided by Ralph Baldwin’s description of what he called, The Prize Discovery in his 1963 book, The Measure of the Moon. This was a giant circular area west of the Altai Scarp of the Nectaris Basin, indicated by the white lines on the big image. Later, Don Wilhelm’s accepted this as a doubtful ancient impact basin that he named Werner-Airy, after two craters along the most convincing part of the possible basin rim. Ancient impact basins are expected to be very degraded so there has been little evidence one way or the other of its reality. The recognition of this suite of volcanic features described above is difficult to understand unless this is a real basin, whose deep fractures may have allowed magma to erupt onto the surface. A characteristic of the area within the dashed lines is that nearly all the craters and the space between them are covered with smooth material. This is not dark at full Moon and so is not mare lava. The standard interpretation is that this smooth material is ejecta from nearby basins such as Nectaris and Imbrium. But its concentration within the putative basin makes it possible to consider that the smooth fill could be volcanic. Or it could be ejecta ponded within a basin depression! I do not know if the arrowed domical hills have been commented on before. The linear group seems quite likely to be volcanic, if so, so may be the other features.

Technical Details:
The top image is a mosaic of Lunar Orbiter IV from the US Geological Survey Map-A-Planet site, and the lower image is LO IV-96-H1 from the new Lunar & Planetary Institute scanning of Orbiter images. These two new resources revive the value of Orbiter imagery.