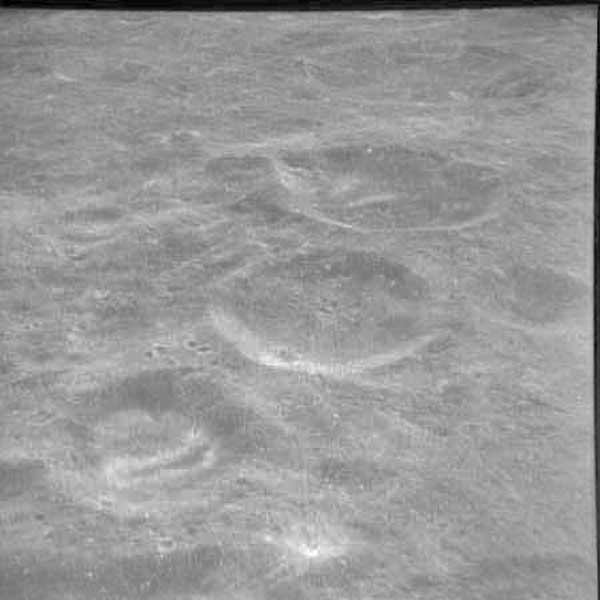 Danny Caes, the indefatigable explorer of ancient Apollo photos, has discovered a strange farside feature that he suggests may be an unknown swirl. And it might be, but it is hard to find any other image to get more information. Danny has been looking through the generally ignored high Sun images from Apollo 8 and 10. The fact that astronauts took so many high Sun images that we generally consider poor is perhaps because (1) they were the first and second crews to get close to the Moon and everything was new, and (2) their eyes could better accommodate the brightness to see more detail than the film in their Hasselblad cameras could record. This is certainly a lousy scan of the image and my enlarging it makes it worse. The possible swirl is on the floor of the crater at bottom left; the swirl is the banana-shaped dark area surrounded by a bright outline; its reality is confirmed by its appearance in the previous image. I must admit I can't match any of these craters with the same area (supposedly about 119.5°E and 0° to 5°S) on Clementine (btw, the Map-A-Planet site has been so slow that I've used the less versatile but more convenient US Navy browsable mosaic). This area is bright because it is in the massive ray of the very bright crater Necho. We may have to wait for a Wide Angle Camera shot from LRO to finally get a decent look at this area of the Moon. Or maybe it has already been imaged by the Chinese, Japanese or Indians, whose recent lunar orbiters imaged nearly the entire Moon, but so far only a tiny fraction of their images have been released. Oh, to study Mars, where all the data are available.