US-1 and Other Signposts 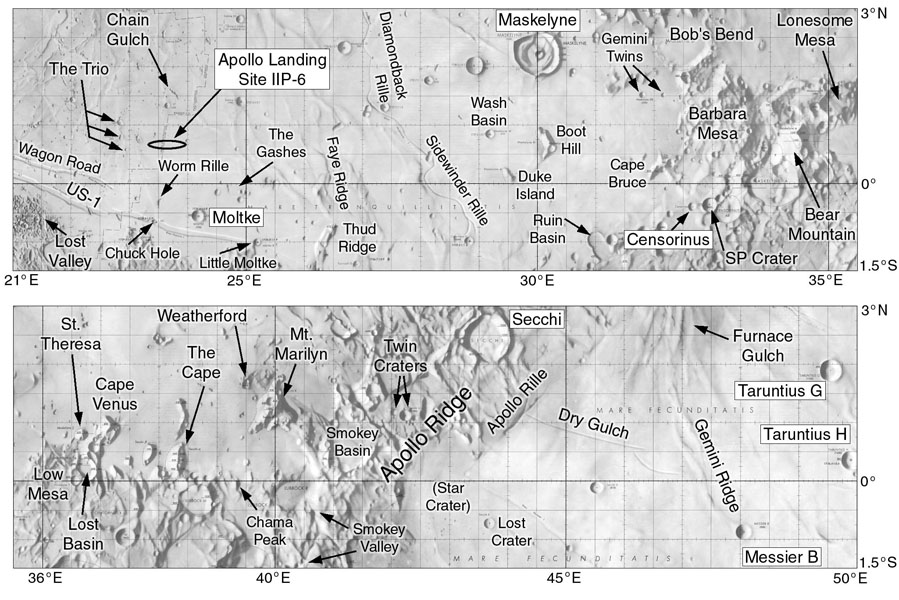 If you are going to the Moon you need more names than are required for Earthly observers. In preparation for their rehearsal of Apollo 11’s landing, the Apollo 10 crew created more than 40 informal placenames to use as landmarks and to communicate to the mission controllers in Houston where they were on approach to the Apollo 11 landing site (IIP-6 on the chart). The names are either descriptive - The Trio, Sidewinder Rille, and The Cape, or personal Marilyn is Jim Lovell’s wife, Weatherford is the town where Tom Stafford was born, and SP Crater is a crater near Flagstaff, AZ, which the astronauts undoubtedly visited during their training. Once again, perhaps these names would have been lost except for Phil Stooke’s recovery and inclusion of them in his new The International Atlas of Lunar Exploration. I thank Phil for sharing with LPOD in advance of publication of his book!

Technical Details:
Phil discovered the hand-lettered originals of these maps in the library of the Lunar and Planetary Institute; apparently they have never been published. The boxed names on the chart are official nomenclature. Other official names existed but the Apollo 10 crew chose not to use them.