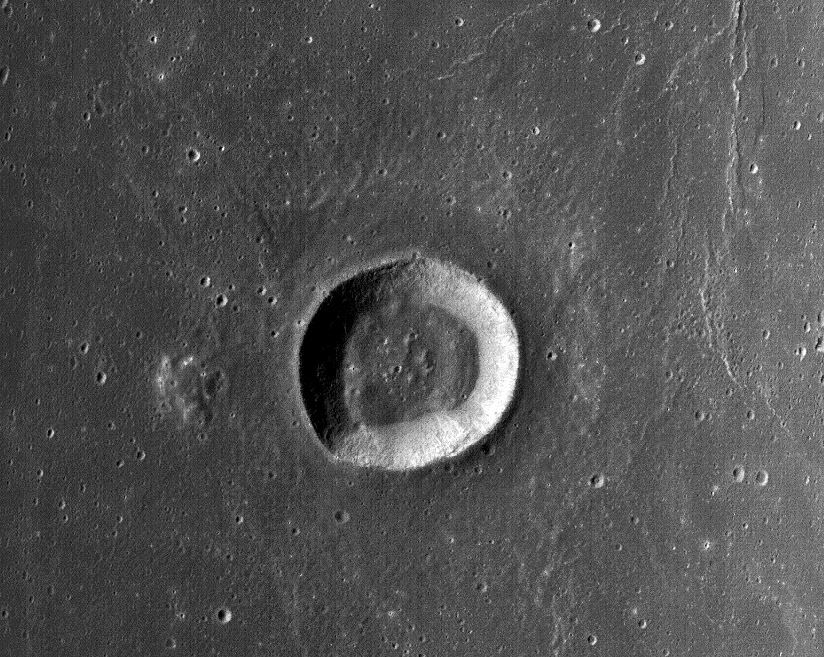 What can you say about an inconspicuous 15 km wide crater in Mare Nubium? With Rich's processing of this Lunar Reconnaissance Orbiter WAC image there are now a few things about Nicollet to comment on. This is a small crater in the transition zone between small-floored simple craters and larger complex craters with wall slumps, incipient terraces and larger central peaks.The annular mound on Nicollet's floor is probably material that has slumped down the walls, and the four little hills are the precursors of a real central peak in larger craters. I am surprised by the smooth dark material that seems to veneer everything on the floor. It could be impact melt, but there seems to be a lot, the crater is somewhat old for melt to be preserved, and it covers the slumps. I don't have exact data on how much melt there should be and how quickly it gets broken up by micrometeorite bombardment - LRO studies will ultimately provide such answers - but at larger craters the melt tends to not be on slump blocks. This may be because the melt flows off them or that the slumps form after the impact melt is ejected and falls back to the surface. But in Nicollet the slumps formed quickly enough during the impact that they got in place before the melt rained down. If it is melt. One final observation. Outside the crater there is a roughness of the mare surface that is a still visible circular remnant of Nicollet's ejecta blanket. This has either been covered and muted by a subsequent thin flow of Nubium lavas, or it has been beaten down by micrometeorites - the same process that didn't destroy the much more fragile impact melt covering the crater floor. If it is melt. What do you think?


Yesterday's LPOD: Is It or Isn't It?

Tomorrow's LPOD: It's Just a Phase