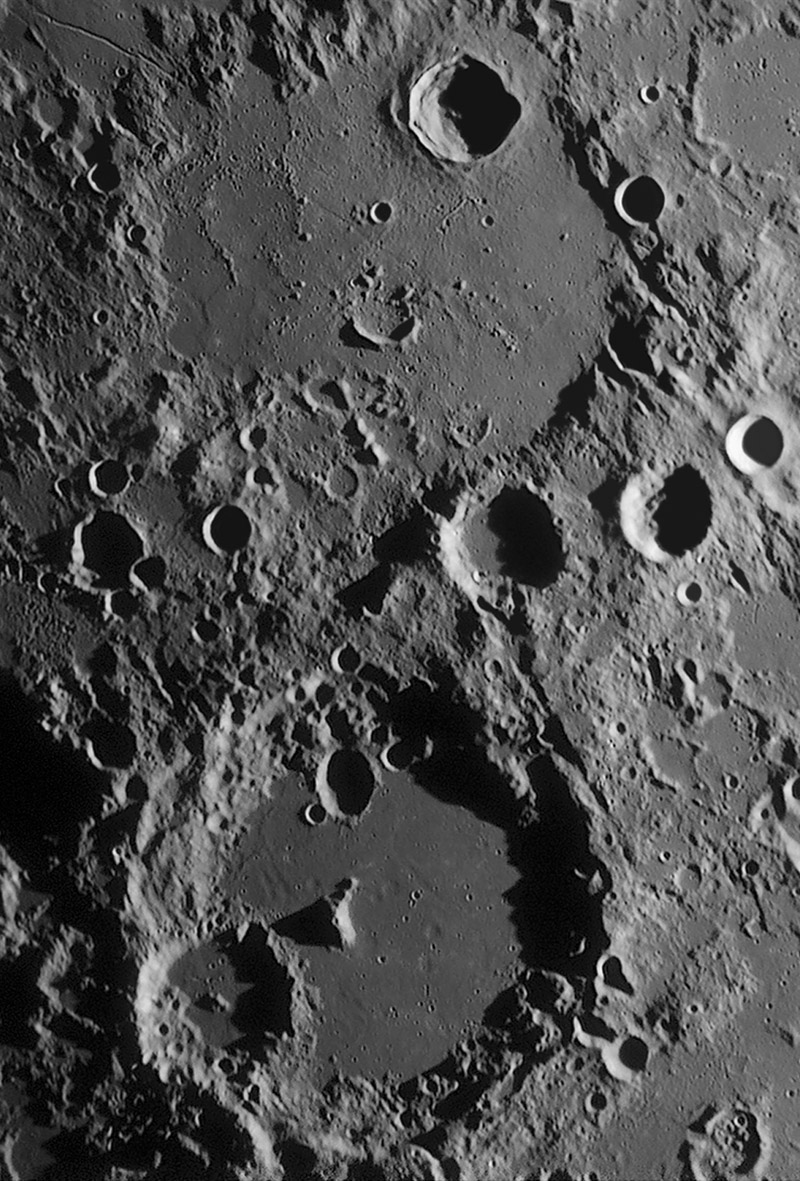 Twenty-four kilometers of diameter separate 114 km Albategnius and 138 km Hipparchus, as do vast amounts of modification. Both craters are older than the Imbrium Basin, for both are affected by its ejecta. But Albategnius is much less altered from its pristine impact condition. It still has a well-defined massive rim that rises 3.2 km above its obviously flooded floor. Because the floor is not dark under high illumination it is not mare basalt, and the lack of dark halo impact craters suggests that the light hue is not just a patina of ejecta over basalt. The supposition is that the smooth floor material is fluidized ejecta from Imbrium's formation. Like the material on the floor of nearby Ptolemaeus the ejecta thickly draped pre-existing craters on Albategnius' floor creating the saucers. This high res, low Sun view reveals two parallel crater chain saucers at the upper left of the floor. Notice two half-shadowed crater chains just outside Albategnius' northwest rim. These half-shadowed chains and the saucer chains are Imbrium Basin crater chains, and since they are almost aligned, perhaps the saucers are continuations of the shadowed chains. Look now at the older, shallower (only 1.1 km deep) Hipparchus that has more rocky, really hilly, ejecta that has deeply filled the crater. The rille that crosses the crater floor is also aligned with a trough outside its rim, the Réaumur Rille at upper left. Like the Albategnius crater chains these are roughly radial to Imbrium and probably have some relation to the basin. Perhaps a crustal fracture was formed and partially filled by a rising dike of mare basalt magma, wedging apart the crust to make the rille. When we get high resolution maps of the Moon's magnetic field we can see if a magnetic anomaly lies on top of the rille.

Related Links
Rükl plate 44
This is only part of a larger mosaic that you don't want to miss!