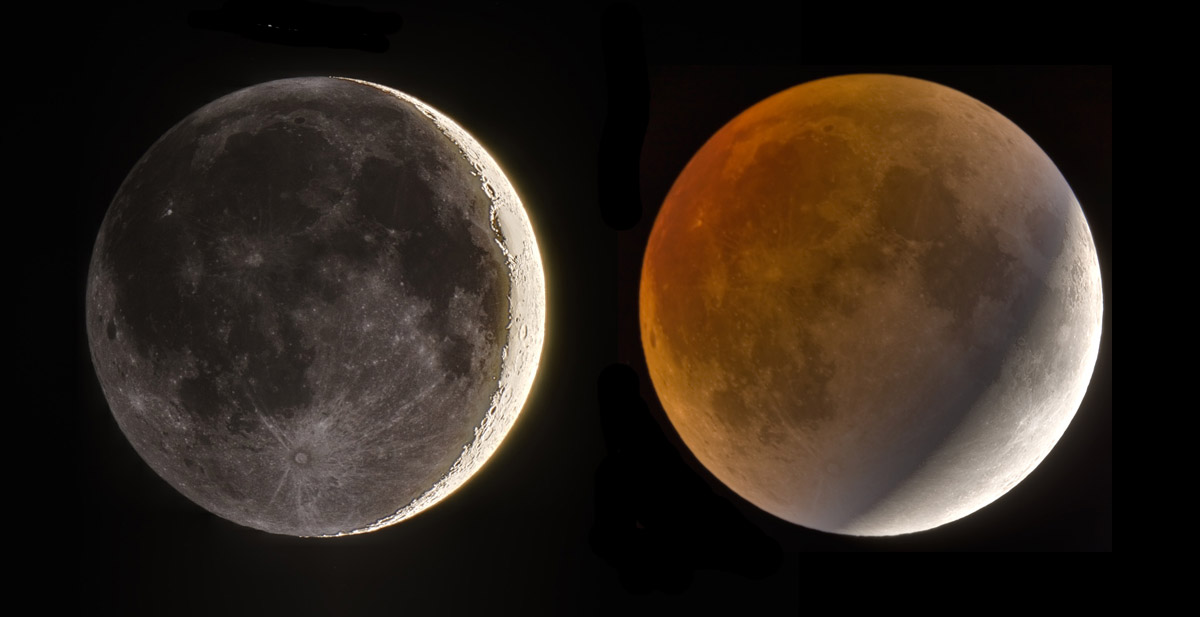 Look carefully at these images before reading further.
These are wonderful views, very much like what your eyes see. But not what cameras can capture. Jacques has developed a multi-step process that mostly solves the problem of creating naturalistic images showing very bright and much dimmer areas of the Moon. He sent me different images hoping that one might be suitable for LPOD, but I think both examples are remarkable, opening up new creative approaches to lunar imaging. The left image of Earthshine was created from 5 separate exposures of different durations taken by Richard Galli on Feb 9, 2008. Jacques took the five individual images of the lunar eclipse of Feb 21, 2008 that are the basis of the image on the right. To produce each of these composite images he aligned them using the PTGui software and the 5 tiff files were combined using Photomatix to an HDR (High Dynamic Range) file. To recover visually the recorded dynamic range, Jaques used the tone mapping tool Details Enhancer and the blending function "Highlights & Shadows- Adjust" with Photomatix 3.0. The results show the shadow of the Earth during the eclipse more sharply than I've seen it on other images, while preserving content visibility on both sides - this would be of great use in timing the shadow. The left image reveals how exceptionally bright Aristarchus is in Earthshine, making it easy to understand how Herschel and countless amateurs since have reported it to be in eruption.

1) Anyone with access to Photoshop CS2 or higher can emulate this technique using the inbuilt HDR processing option although I'm eager to try Jacques approach using the software listed above. Beautiful images there BTW, having seen several nebula HDR examples but only a few Lunar shots, it's nice to see such exquisite examples.
Mark