Lots Going On in a Vacuum 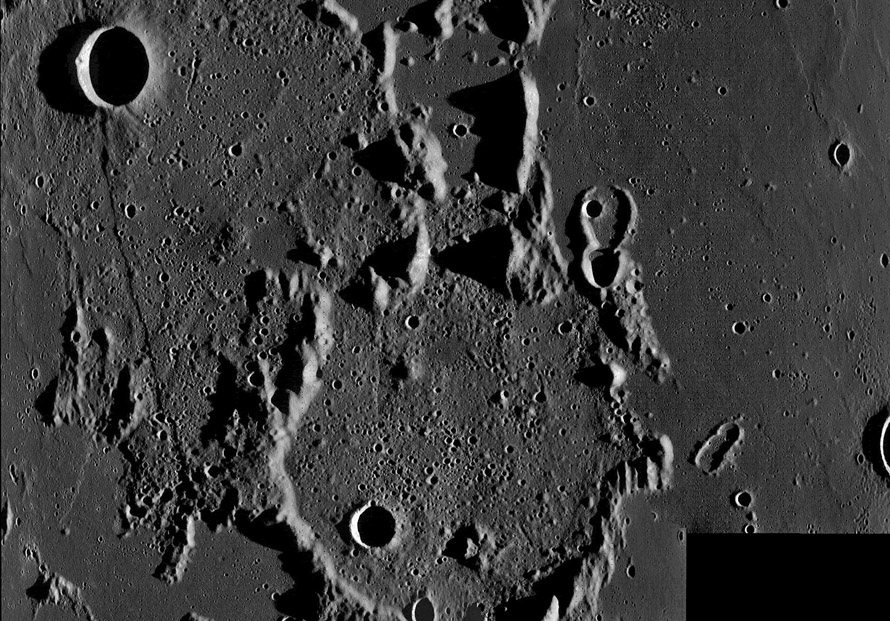 Guericke. One of the oddest names for a crater, but an interesting feature, nonetheless. Actually, it is not so much Guericke, an old degraded crater, but some small landforms near it that deserve comment. First is the overlapping threesome in the mare just east of Guericke. These are simultaneous impacts, either a basin secondary chain or perhaps a projectile that was gravitationally sheared into three just before hitting. In the 1-o'clock position from Guericke is a pear-shaped crater (S) connected to another (J) that looks elongated - these may have a similar origin to the triplet. A different type of oddity is the triangular depression on the upper left side of Guericke. I assume this is a collapse into a volcanic vent area. Half way between this arrowhead and the sharp crater Tolansky (at upper left) is a rough textured mound. It is probably not a dome covered by Imbrium ejecta - but it could be. Tolansky has a one in a million impact cutting its rim crest. In the old days this would be cited as a near impossibility and thus likely to be volcanic. The old days weren't all good. Finally, heading southward from Tolansky is what looks like one side of a rille. This is probably all that is left from a rille that cut an underlying lava flow that was later veneered by basin ejecta. A lot was going on in this neighborhood a few billion years ago.