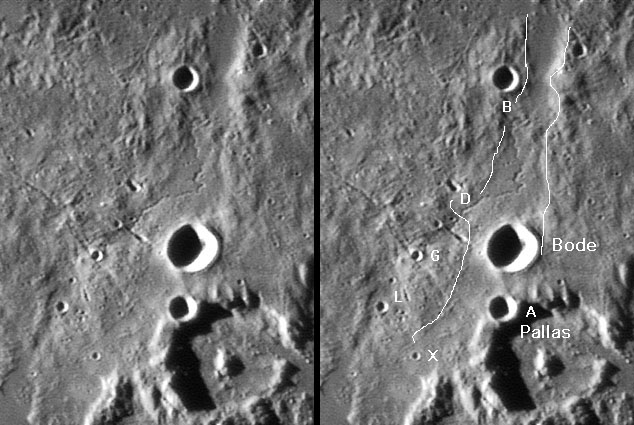 As a good generalization, sinuous rilles occur on the maria because the rilles are distributary channels for flowing lava. There are some exceptions, including the four around Plato, and here is another one. The Bode Rille seems to starts at an elongate depression (similar to the one at Hadley Rille) and meanders northward for about 65 km in a series of tight bends. A similar rille, just off the image to the north, is apparently not connected to this Bode Rille. This rille appears to be in a graben or valley (marked by white lines) which could simply be overlapping old craters or a real graben where the land between facing faults subsided into a trough. Like the Plato rilles this one cuts thru Imbrium ejecta deposits. The rilles are younger than the ejecta and must represent magma which rose up - perhaps from the same source as the Sinus Medii or Sinus Aestuum lavas - and carved the channel. This rille is peculiar though in that there is no lava associated with it. What is related to the Bode rilles, but not visible here, is a vast deposit of pyroclastic material. In fact, it is the third largest pyroclastic unit on the Moon (only the Aristarchus and Aestuum mantles are bigger). Looking near full Moon you will see that this area is darker than the maria - it contains very dark, iron-rich glass beads from gas-powered eruptions. So somehow, in ways not clear to me, this meek little rille is related to powerful explosive eruptions.

Technical Details:
Although the Rukl Atlas labels this Rima Bode, the LAC 59 chart does not label it at all, and the Lunar Quadrant Maps call it Rima Bode III. As a compiler of the latter I prefer that designation, but the confusion serves once again to emphasize the failure of the IAU to carefully track lunar nomenclature for landforms other than named craters.