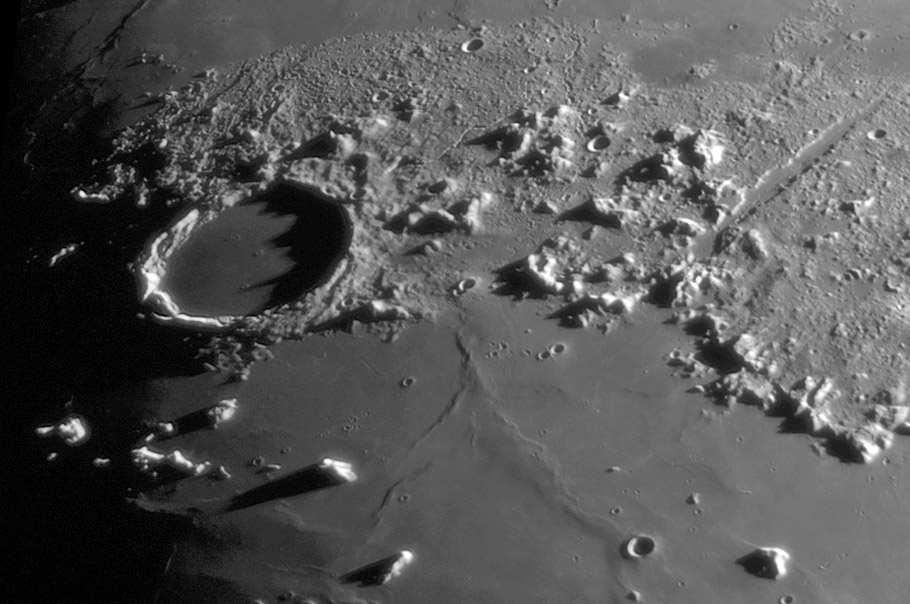 This is a view of a classic region of the Moon. Everyone looks at the Alpine Valley - can you see the central rille? - and the craterlets and long shadows in Plato. These are intriguing features but there are additional ones to observe and think of. At the very small scale there is a delicate rille, just visible here, on the mare halfway between Plato and the Valley. And to the right of the end of the rille are two just touching small craters with a perpendicular ridge between them. These were simultaneous impacts, but as secondary craters or a tidally-divided comet or asteroid is unknown. There is a much larger feature to consider here as well. Two massive mountains and a mare ridge define an ellipse on the mare just south of Plato. This feature has been called Ancient Newton and is generally interpreted as a earlier Plato-size impact crater whose walls have been inundated by mare lavas. This may very well be true, but it is hard to understand what process would totally remove nearly all of the crater wall and yet leave the two massive mountains (and a third near Plato) standing. Conceivably, the two isolated peaks are really parts of the Teneriffe Mountains - basin rings of Imbrium - and the peak near Plato may be an outlier of the Alps Mountains. This seems less likely than that they are part of a vanquished crater. But how did it happen these these massive peaks were left behind?

Tomorrow's LPOD: After Years of Wanting And Waiting*