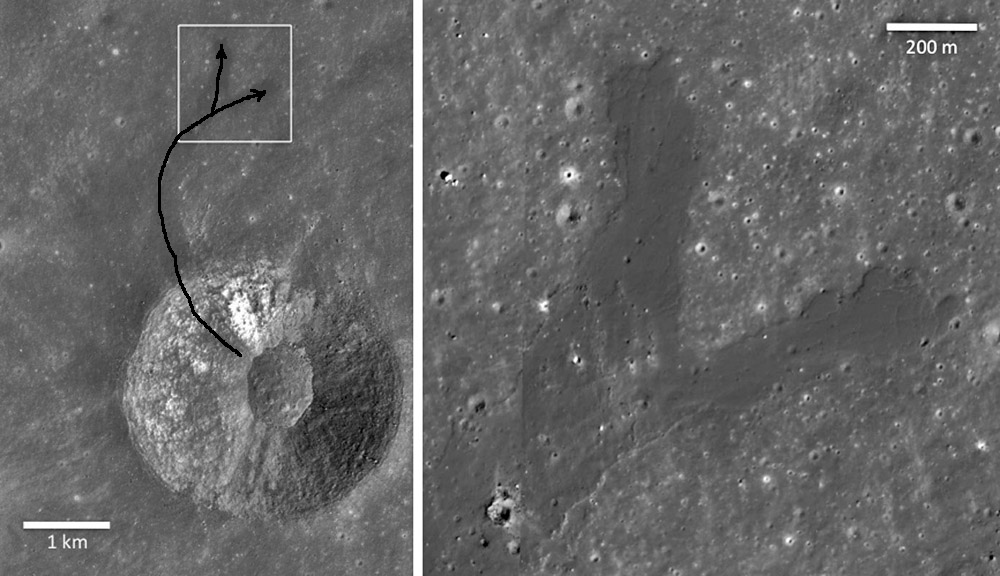 The hyper-resolution of LRO is disclosing phenomena that we haven't seen before. One type of feature that has been especially well depicted is impact melt. Studies in the 1970s from Lunar Orbiter images and Apollo photos demonstrated that thin veneers of melt were commonly splashed around fresh impact craters. This image of a 3.1 km diameter crater at 161°E and 30°N shows an impact melt that is strange because it is so massive. It appears that a broad swath of the left exterior of the crater has a patina of dark melt, that flowed downhill, including turning nearly 90° to the right, before breaking into two wide lobes (right image). B. Ray Hawke, who wrote the caption for the LRO Featured Image story, suggests that a local high spot divided the advancing flow into two. The other end of the flow is fascinating too. The flow at the rim crest has a sharply defined right edge, which continues down the inner wall of the crater to the floor. This suggests that the flow was propelled up the crater wall - not ballistically launched - and flowed over the top and downslope along the surface as we see it. Can impact melt behave like a ground surge that effortlessly rises up and down slopes until it cools enough to freeze in place?


Yesterday's LPOD: A Call To Arms