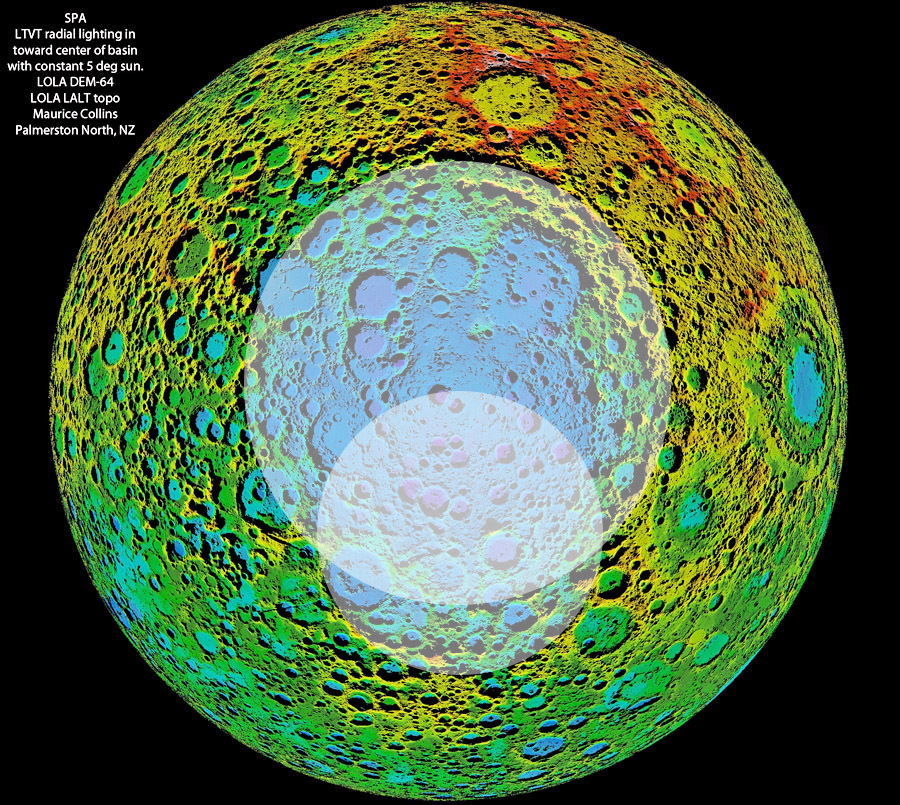 Notice anything unusual about this digital terrain image centered on the South Pole-Aitken basin on the farside? Maurice, the New Zealand wizard of lunar mapping, wondered if basin ring structure would be enhanced if lighting was everywhere radial to the center of the basin. Jim Mosher very quickly modified LTVT to allow that option, and this dramatic map is one of the results. I am not sure that more ring segments can be convincingly identified. The dual ring at the top of the basin is conspicuous, but the scattered massifs near the bottom of the basin - the Leibnitz Mountains - almost seem more visible when observed from Earth along the southern limb. The definition of the SPA basin seems best marked by the colors of the contours - the basin floor is blue, and the yellows and some greens must be the rim. What strikes me most is the lack of roundness of SPA. In fact I can fit a circle to all of the likely rim segments except those near the South Pole, defining the diameter of SPA as 2100 km. The familiar Leibnitz Mountains, long thought to be part of the SPA rim, may be part of an older basin about 1400 km wide, with the opposite side passing through the crater Bose. If this South Pole - Bose basin is real, it would help explain the offset of the deepest part of SPA (purple crater floors) to the south of its assumed geometric center. In this speculative interpretation the deepest part occurs in the overlap area of the two basins, where the crust was already thin when SPA formed. Before any press releases are issued I need to check the recent literature to see what others say about SPA. Possibly it was an oblique impact, which could explain its non-circular shape and offset of the deep center. But the idea presented here, stimulated by Maurice's colorful image, is tantalizing.