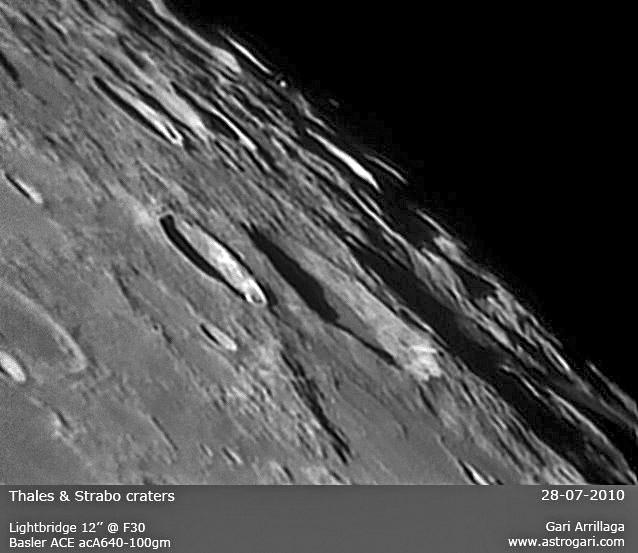 This is another treasure from the LPOD Photo Gallery. It has a number of firsts associated with it. The first LPOD image from Gari, the first LPOD image taken with a Meade Lightbridge telescope, and the first closeup LPOD image of Thales and Strabo. These two craters are in the nondescript highland region between eastern Frigoris and the limb. The nearest well-known crater is Endymion, off the image to the right. With this lighting and libration the interior of the smaller crater Thales is not visible, but it is a standard small complex crater with a floor that is half flat and half covered with a central peak and slumps of material that slid down the inner wall. Strabo looks much like Geber and similar craters in the southern highlands. Its walls carry hints of terraces but are mostly smoothed by seismic shaking and impact gardening, and the floor is obviously younger, being flat, smooth and little pocked by craters. Just south is part of the probable non-crater de la Rue, whose flooded floor includes a crater ring almost covered by the lavas; a little more and it would be a ghost crater.

Tomorrow's LPOD: How Thick Are the Alps?