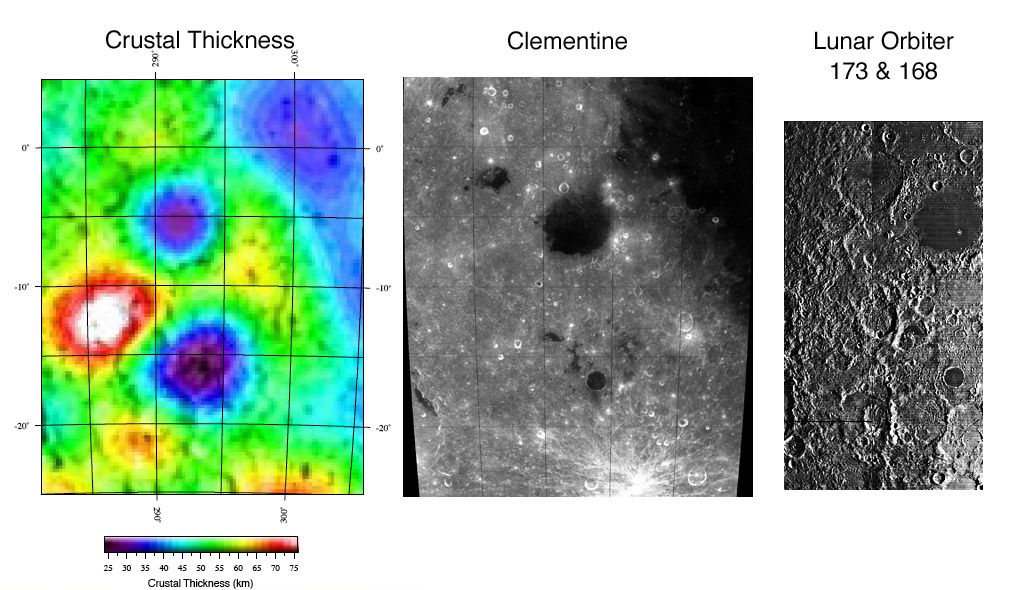 Many scientists who study the Moon rarely look at images of the surface. They create new images of things we can’t see and that can’t be measured directly. Mark Wieczorek and colleagues have created a map of the calculated thickness of the lunar crust. How? By combining (1) topographic data from the Clementine spacecraft and (2) maps of the Moon’s gravity derived from the pulls on the Clementine and other spacecraft as they orbited the Moon, with (3) mathematical models of likely crustal composition, all anchored to a (4) crustal depth at the Apollo 12 & 14 sites. The left image shows a the model result for the area of Grimaldi and southward. Like many impact basins, Grimaldi has thinned the crust by 15-25 km (due to a rising mantle plug), as shown by the concentric blue circles. To the bottom left of Grimaldi is a huge thickening of the crust - and since there is no tall mountain there, the crust must extend 20 km or so deeper than normal. I don’t know how to explain this inverse mountain. An additional surprise is the strong thinning of the crust south of Grimaldi. There must be a significant impact basin approximately under the dark-floored crater Cruger, and completely buried by later materials since there is no morphologic evidence of its existence! This hidden basin solves the mystery of why there are mare lavas in Cruger, Lacus Aestatis, and other nearby small patches. The crust is so thin (25 km) that magma has leaked up basin faults to the surface. But wait! There is more. Radar shows that this area is also widely underlain by maria that connects to Procellarum. This is apparently yet another stage of mare activity. All these different data sets - gravity, topography, optical imaging and radar - peel back layers of the complex history of this corner of the Moon. The surface is just the starting point for understanding!

Tomorrow's LPOD: What is Undarum?