How Much Moon is Enough? 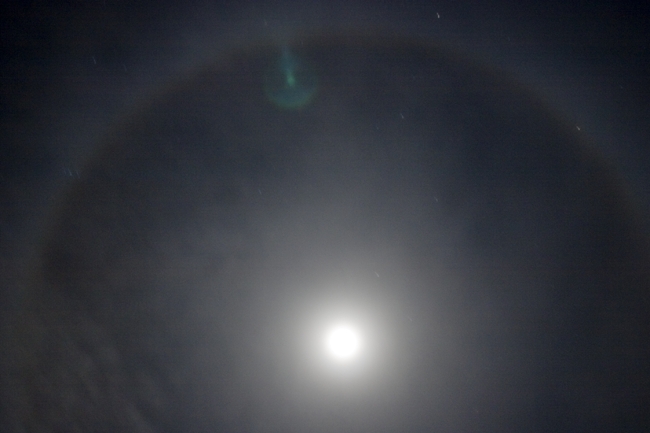 LPOD has featured a number of lunar halos- circumferential rainbows around the full Moon. In a previous discussion I wondered if halos only occur around full Moon or also at phases when less of its surface is illuminated. Anthony now has an answer. The image above was taken Jan 16 when the Moon was about 8 days old, just past first quarter. Anthony comments on his website that unlike a halo around a full Moon, which typically requires a 4 second exposure, this one took 15 seconds. And the 4 second exposure is at a film speed of ISO 100 and this is at ISO 200, so about 8 times as much light was required. On the web I found that the quarter phases are only 8% as bright as full Moon, so the exposure should be about 12 times as long, not 8. Why the difference? Another web site wonderfully explains all the factors more subtle than phases that affect the Moon's brightness, including its distance from Earth, our distance from the Sun, exactly how close to full the Moon is (the opposition effect), its elevation in the sky, and transparency of the atmosphere. Any combination of these could easily account for the difference between 8 and 12 - and it is 8 days old, not 7! But the significantly fainter halo accounts for them being less noticed for phases other than full. Two other mysteries remain. When I used Photoshop to greatly reduce the illumination of the image, all the sky light disappeared leaving a perfect circle of lbrightness, instead of a slightly gibbous shape. I am surprised that an approximately 60% illuminated Moon has the shape of one 100% illuminated. Finally, and most conspicuously, what is the smaller halo around the blue spot near the top? At first I thought this was a star halo, but it would be much fainter. And it has a tail, radiating away from the bright Moon - is it some internal reflection within the lens? Is it a small copy of the large halo? Two for the price (free!) of one?