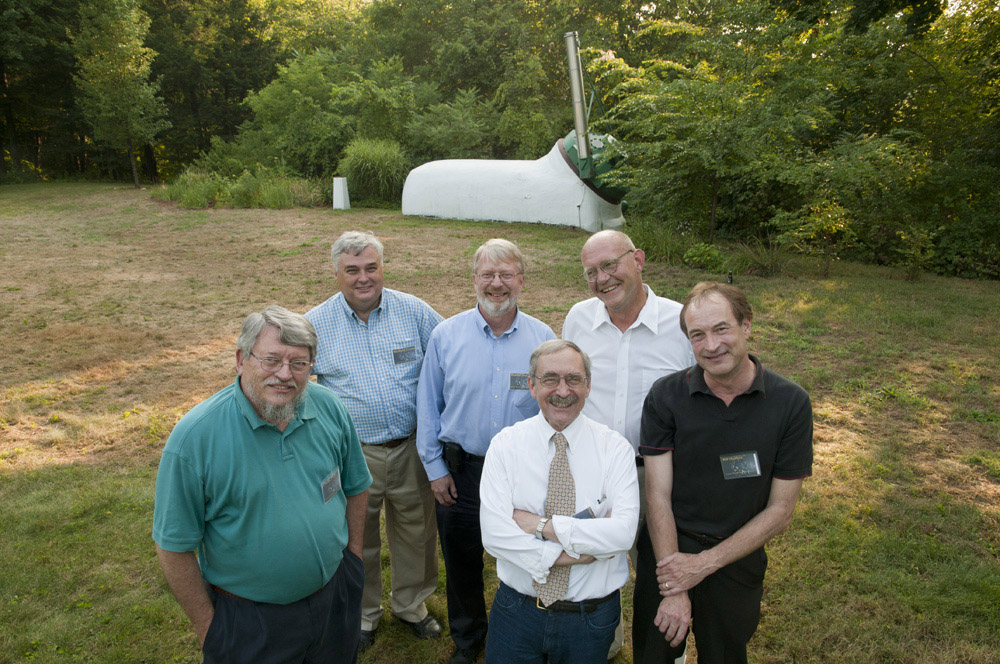 With the famous Hartness Turret Telescope in the background, this scene is immediately identifiable to ATM's* as being near the Stellafane telescope gathering at Springfield, Vermont. John Briggs and Dan Lorraine organized a one day Moon Morphology workshop the day before Stellafane officially starts and drew a fantastic set of speakers (above) and a very inquisitive and knowledgeable audience. The balance of interest and experience of the speakers fed a continuing discussion of lunar science and history. I gave an introduction about learning to read the history of the Moon from evidence visible in the eyepiece and in images, and then a second talk about how LTVT, LRO topo data and other recent technologies brought great opportunities to amateurs. Pete Shultz made a connection between the very young Ina structure and the very ancient South Pole-Aitken basin that may have been an oblique impact that strongly affected the nearside. At a banquet talk Pete also revealed the complexity of volatile release by the LCROSS impact. Next three astronomy historians took the stage. Bill Sheehan reviewed theories of the origin and lunar craters, especially the contributions of A. Gifford, a New Zealand scientist who deduced in the 1920s a modern understanding of the impact process. Next Tom Dobbins dissected evidence for (very little) and against (a lot) the reality of lunar transient phenomena, especially the Kozyrev spectrum of a putative lunar eruption in 1958. Ron Doel also discussed Kozyrev and how Gerard Kuiper struggled to evaluate Koyrev and his observation. Finally, Rich Evans showed how he and members of the GRL group have developed tools to deduce compositional information about the Moon, essentially duplicating the most complex investigations that professional lunar scientists had initiated. The many knowledgeable statements and comments from the floor made the entire day a great success.