A Tale of Two Craters 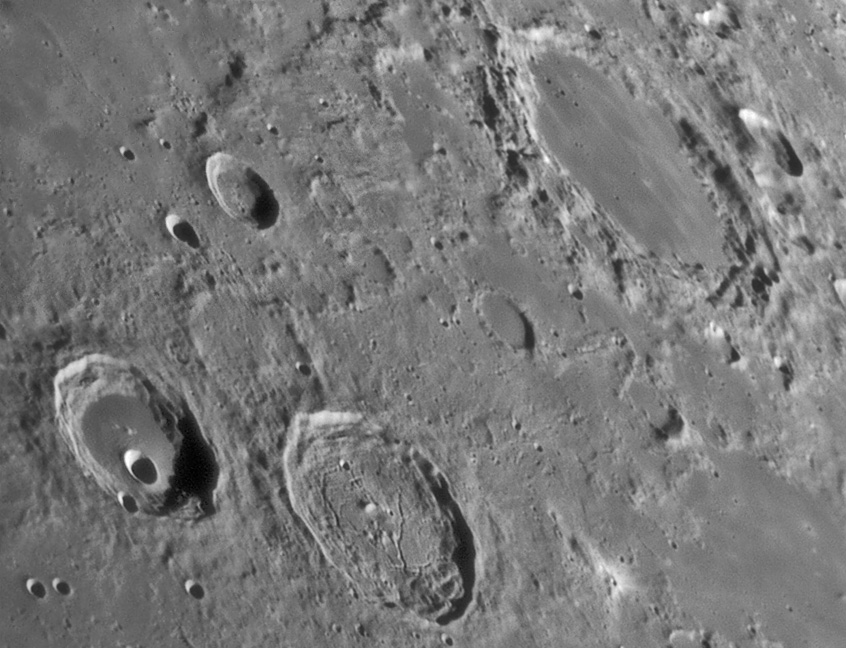 Craters of about the same size which are near each other are always linked together in our minds and eyes. Sabine and Ritter is one such pair but the most famous is Atlas and Hercules. These ancient superheroes look completely different. Hercules (69 km diameter) has a flat, mare-filled floor with a pip of a peak and a 14 km wide later impact. Atlas (87 km) is shallow, also with a few remnants of a central peak complex. But the floor of Atlas is circled by delicate rilles and at least one cuts diagonally across it. Why do these interiors differ so much? Atlas is a floor-fractured crater– that means that the space under it was intruded by magma that pushed its floor up and cracked it. Under high sun you will see dark spots on both the northern and southern parts of the floor. Those are dark halo craters formed where the magma broke through to the surface. Both Atlas and Hercules were invaded by magma, but with different results. At Hercules it erupted onto the floor creating a thin mare lava pond. At Atlas most of the magma stayed below the floor, but domed it up, making an interesting interior for observers to wonder about 3.5 billion years later.

Yesterday's LPOD: A Penchant for Names