Evidence for a Lunar Tsunami 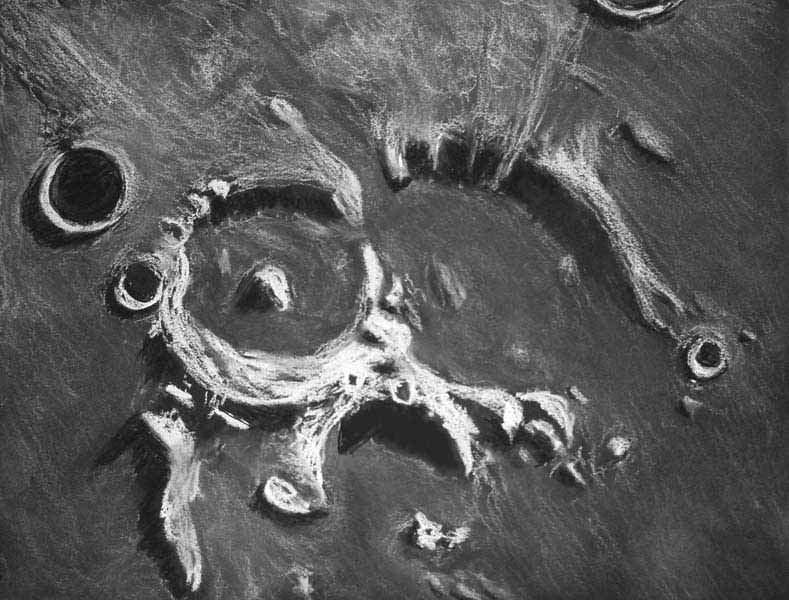 For shear power and awesome destructive force, nothing on the surface of the Moon compares to the furious energy released by a basin forming impact. Three billion, 800 million years ago an asteriod, roughly 65 kilometers in diameter and moving at 30 km/second, hurtled silently towards the Moon and slammed into the northwestern quadrant.The Impact created a blindingly intense plasma sphere, irradiating the lunar surface for hundreds of kilometers around, and many times hotter than the photosphere of our Sun. Though the asteriod was melted and vaporized completely a couple of seconds after impact, a huge volume of the lunar regolith and mantle was melted and ejected from an ever deepening and expanding transient cavity. Tossed aside in an rapidly enlarging cone of melted and broken crust, chunks of lunar regolith, some the size of cities, traced out graceful trajectories, belying their terrible power to modify the visible face of our Moon. In the center, at ground zero, a depressed, 300 km diameter zone of crust and mantle are shoved down tens of kilometers by the violence of the seismic assault. The resultant reaction is both swift and inevitable. An awesome, yet transitory visage of a central peak rises to an elevation that is three times that of Earth's Mount Everest. Collapsing within seconds the shock is transferred outward as a lunar quake of monumental proportions. These radiating shocks, like the circular waves created by tossing a stone into a pond, lift and drop the lunar terrain for hundreds of kilometers about the point of impact. Undulating the crust, massive rings of terrain are uplifted and faulted . In mere seconds, jagged, several arcuate mountain ranges are left stabbing the dark lunar sky. As the cone of ejecta widens, the re-impacting debris swept up a roiling ring of debris, hundreds of kilometer in diameter and several kilometers deep. As in complex craters, the greatest load of ejecta around a basin falls within about 2-3 basin radii. However, an outward rushing fluidized flow starts with the reimpacting of this material, hugs the Moon's surface and is deflected and redirected by the lunar topography as it forces it's way from the center of the maelstrom. Crater rims that faced the onslaught of these tumultuous debris flows were eroded and filled in as the front passed through. Even secondary craters which formed as ejecta impacted several basin radii away, are inundated and scoured by these late arriving floods of stone and thick dust.These powerful flow fronts may have brought about phenomena rarely associated with the Moon. The thick roiling dust cloud was composed of tiny particles that would act to create a temporary particulate atmosphere. The sound would be contained in the moving flow and would be an eerie companion to its surging devastation. It might also be possible that these flows provided displays of lunar lightning, as ions attached to dust were transported in the turbulent wall of moving debris. Located some 350 km from the topographic rim of the Imbrium basin, 51 km Pallas of Nectarian age and 60 km Pre Nectarian Murchison had already been implaced for hundreds of millions of years prior to the sudden violence of this basin creating event. There position, well within the reach of these devastating flows, put them too close to avoid inundation, as the massive wall of chaotic debris churned through the area within minutes of the impact. The awesome extent of the erosive and depositional processes unleashed by a basin forming impact are difficult to put into human perspective, however, a close look at Pallas and Murchison helps to frame our understanding of the immense power behind these fluidized flows. As the flow passed through, the glacis or rims of both were nearly completely removed by it's irresistable shearing action. Huge gapping clefts were gouged out of these crater's walls as the material ripped over their terraces and flooded their ancient floors. The terrain around them has the definite evidence of flowing fluid, the radially alligned and lineated valleys all point back to Imbrium, casting accusing fingers at the source of their abrupt creation.