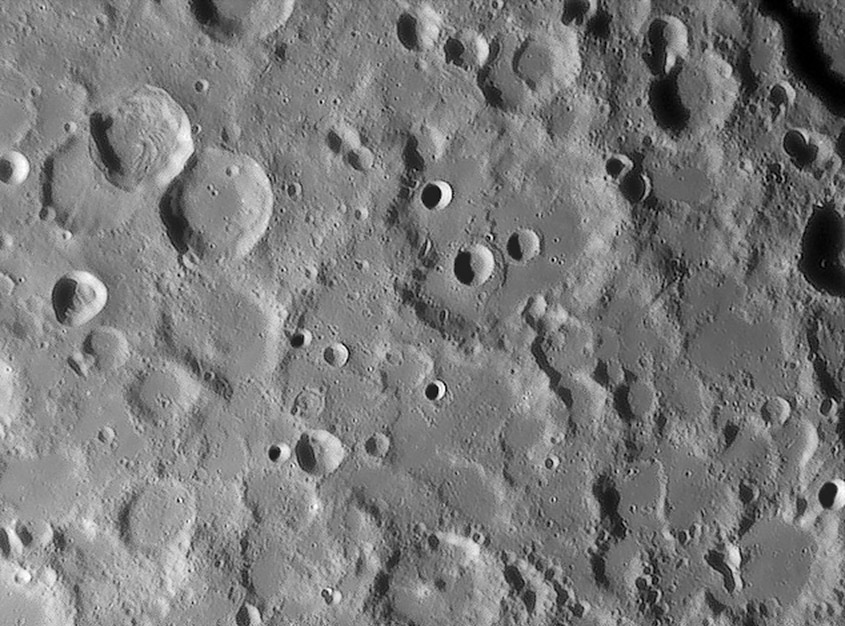 This image shows the area from Sacrobosco (center right) to Abenezra (upper left). Much of it looks like very old craters that have been draped with ejecta. Perhaps this ejecta came from Mare Nectaris of which the outer rampart, Rupes Altai, is partly shown in the upper right. However, there are also many smooth areas which seem like they must be from lava welling up from beneath. This must have occurred later than the ejecta, since the ejecta covered areas contain far more small craters. These smooth areas also seem like they might be of different ages, since some show a number of small craters while a few are very smooth and show nothing above the resolution of the image (~1km). Sacrobosco itself seems to be a good example of this. Probably some of the original ejecta and ejecta from the later craters inside it all seem to have been subsequently covered by lava welling up from underneath. Some parts of this lava seem to have a few later craters while some areas are quite uniform perhaps indicating an even younger area of lava. I don’t understand at all what caused the relatively steep dropoff to the right of the central spine of old ejecta as indicated by the sharp shadow. Using LTVT I guesstimate the height to be in the 200 - 300m range (its small size makes it difficult to be precise with this scale of image). Abenezra is an interesting appearing crater with it’s spiral shaped ridges. It doesn’t seem to have any ejecta draped on it or flat interior areas indicating a flooding of lava so it seems relatively young (VMA lists it as Upper Imbrian). I have no idea what would cause the pattern of floor ridges. Perhaps it was somehow due to a slight overlap with its older neighbor to the southeast, Azophi.

Chuck Wood Note: This interpretation may be correct, but since the Apollo 16 mission failed to sample volcanic lavas in smooth areas such as these (called the Cayley Formation), most lunar scientists consider them to be basin ejecta. I don’t agree because of observations such as Bob’s.

Tomorrow's LPOD: On Top of the World