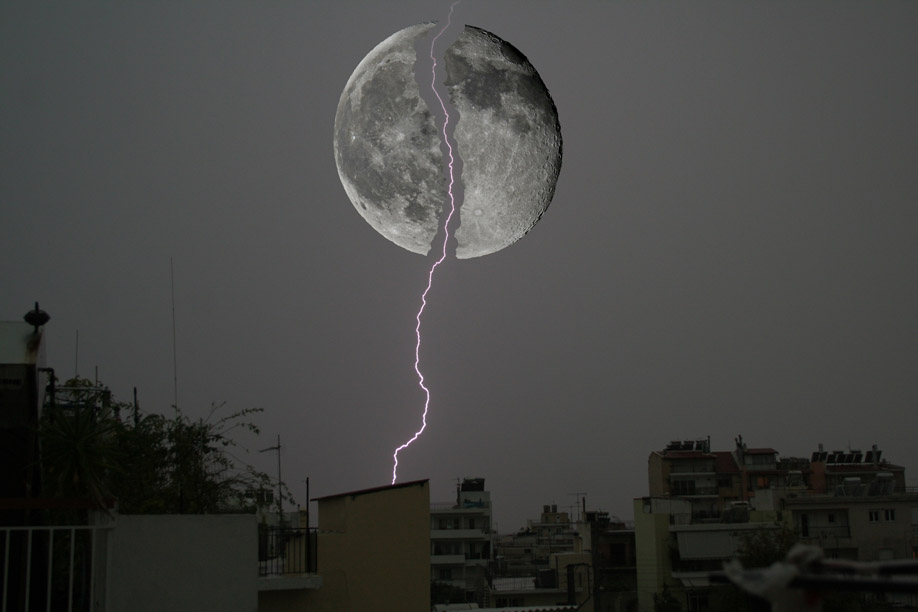 No one ever knew whether it was a giant asteroid that struck the farside of the Moon, or simply a huge electrical discharge from a global warming enhanced summer thunderstorm. Fortunately, a Greek photographer happened to catch the first moment of the Moon’s destruction, and within minutes the two hemispheres were gravitationally sucked back together, breaking down into smaller fragments. Over the next few days individual chunks could be watched tumbling with small pieces of recognizable landforms sometimes flashing into view - one famously showed most of the crater Plato before it was smashed to smithereens. Within a week our fabled satellite was reduced to a rubble pile. Over the next few months the rubble extended into a thin ring that circled the Earth but it didn’t last long. Perturbations between the individual chunks of debris caused about 10% to crash to Earth, and most of the rest were ejected into orbits around the Sun. The loss of the Moon was not noticed by many people because media attention was focused on the tribulations of Brittany Spears and OJ Simpson. But some observers had severe withdrawal symptoms. A builder in Oklahoma discovered that his 18″ was the right size to use as a sawhorse, but was unwieldly. A young British imager became a surfer in Barbados, and a telescope maker in Italy converted his futuristic product into sundials. And a daily blogger previously devoted to the Moon took up embroidery.