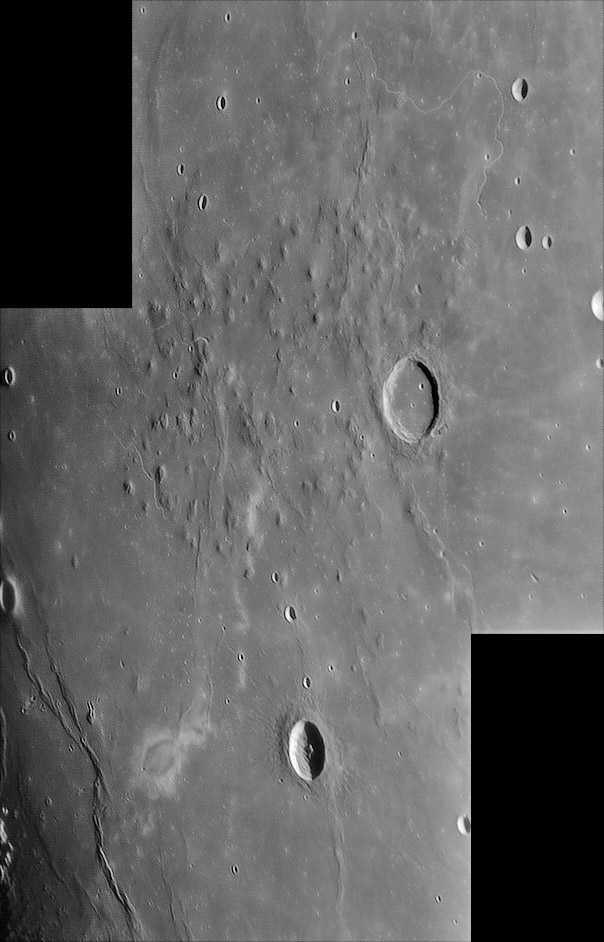 The Marius Hills are the greatest concentration of volcanoes on the Moon. Most are irregular-shaped cones with only a few domes. There are also four major rilles that used to be nearly impossible to capture on images, but Bob has them all. The Marius Rille starts just outside the Hills in the upper right of the image and wiggles about 250 km generally towards the northwest. The next easiest to see is at the diagonally opposite end of the Hills and is called the Galilaei Rille (why isn't it the Galilei Rille?). It's vent is within the Marius Hills but it flows downslope away from them. The other two rilles are unnamed, have their vents near each other in the upper lift section of the hills and flow short distances towards the west. The ends of these rilles seem to be buried by surrounding mare lavas, which must be younger than the rilles. Interestingly, the Galilaei RIlle originated in the Hills but flows down across the mare, showing that it is younger than those lavas. The southern part of the Marius Hills has a very linear edge, and in fact the entire area has a rectangular outline, reminiscent of the Aristarchus Plateau. Why?