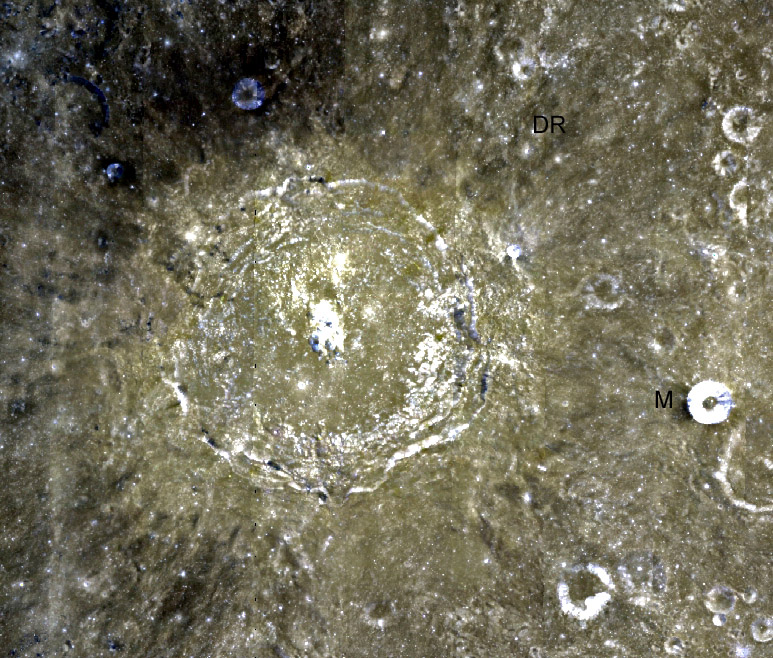 Langrenus M excavated some dark material, presumably buried mare lavas. Now look westward at Langrenus, where the same thing apparently happened. The broad view above shows an image made with ratios of the Clementine ultraviolet and visible wavelength images. These ratio images seem to bring out the dark material best. Langrenus M is to the east (right) with its faint dark rays radiating to the west. More diffuse dark rays appear northeast of Langrenus (on either side of the DR letters) and on the opposite side of the crater - are these real? I think so. The uppermost rim of Langrenus is even more interesting - notice the small dark spots? An enlargement (below) reveals that these are small landslides of dark material that start from a fairly consistent distance below the rim crest. Most are V-shaped with the apex uphill at the dark material source. The most complex pattern of dark material defines a rough circle on the northwestern rim - I don't what would explain that. There are very few dark streaks on the eastern rim of Langrenus - and I can explain that. Langrenus impacted right on a boundary between Mare Fecunditatis and the messy highlands to the east. The dark streaks are almost all on the side that excavated mare material! Langrenus is a special variant of, and especially big, dark halo crater.