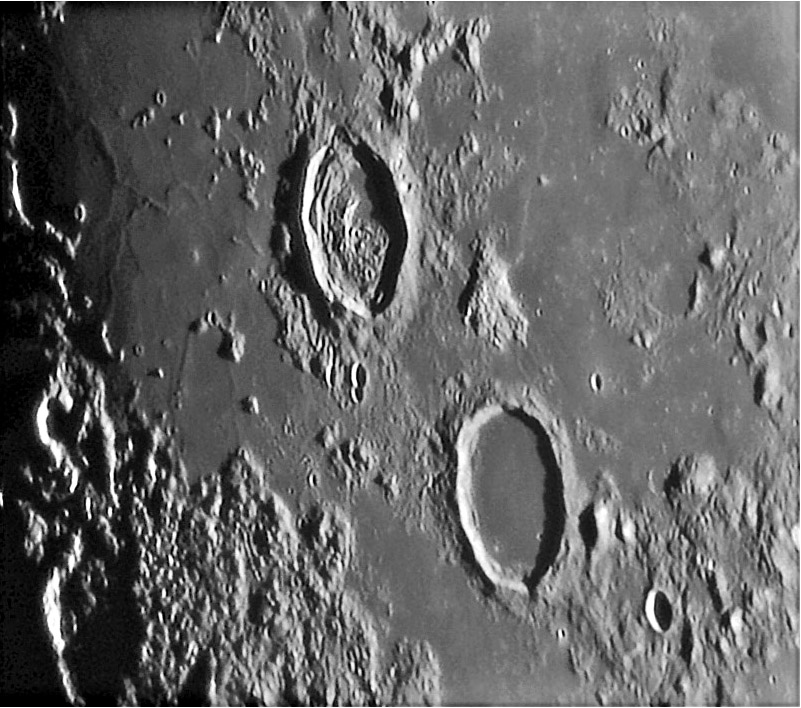 Hansteen (top) and Billy (lower) are the same diameter (45 km) and have very similar narrow inner walls. But the similarity stops there. Billy has a lava-covered floor (making it a dark spot at full Moon) and only a few small slump masses around the edges of its floor. Hansteen has broad piles of debris that fill the southern half of its floor, and slump blocks have slid down its northwestern wall. On Lunar Orbiter IV images it appears that there may be some concentric fratures in Hansteen, making it a floor-fractured crater. The northern rrim of the crater has a strange triangular extension northward where a pile of debris has slid toward the floor. Why do two craters that were probably near twins at birth evolve along such different tracks? There are other interesting things to observe here including the Arrowhead, a possible dome on the mare to the right-center, and the bubbly-terrain of the bottom-left. And another feature needing interpretive clarification is the faint, bright and slightly squiggly line that goes from the Arrowhead to the top of the image. Rükl shows it as a mare ridge, the Lunar Orbiter IV image doesn’t show it, and it looks like it could actually be a delicate sinuous rille. Hmm?