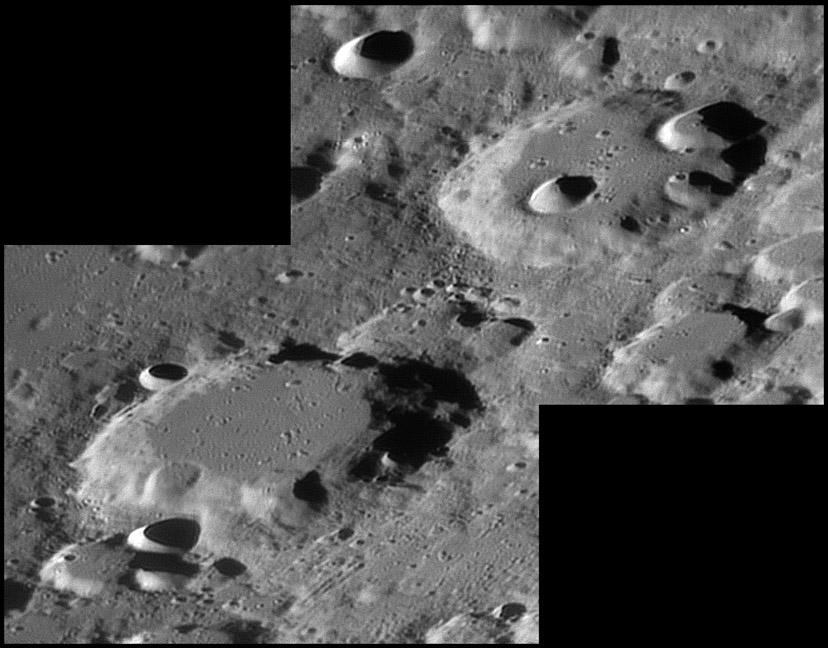 Once away from the limb, the southern highlands lose much of their drama, and there is a welter of similar looking craters with smoothed rims and flat floors. Mutus (above) and Manzinus (below) are good examples, their walls and floors are nearly featureless except where excavated by later impacts. These craters are presumably old, their rims showing the effects of a vast number of seismic shaking events (from Moonwide impacts) that smoothed out the topography of terraces and slumps. Something also filled in the crater floors making them shallow and covering the central peaks. I always wonder if the southern hemisphere floor-filling material could have been some unusual volcanism, and many other lunar scientists consider it to have been fluidized ejecta from impact basins. But perhaps its just the material that has tumbled down the walls - although I don’t know how it would have been smoothed out so carefully. Just south of Manzinus are two well-defined linear depressions that may be tightly-spaced crater chains. Secondary crater chains with the same orientation seem to cross Manzinus’ floor too. Perhaps they are from the much younger Schomberger, which aligns with the linear depressions. Thanks, Damian, for another instructive image!

Technical Details:
26 or 27, March 2007 C14 + Lumenera SKYnyx 2.0M camera. This image has north up so, as is common for scenes near the south polar areas, it looks like these craters are upside down.

Tomorrow's LPOD: The Moon and Life