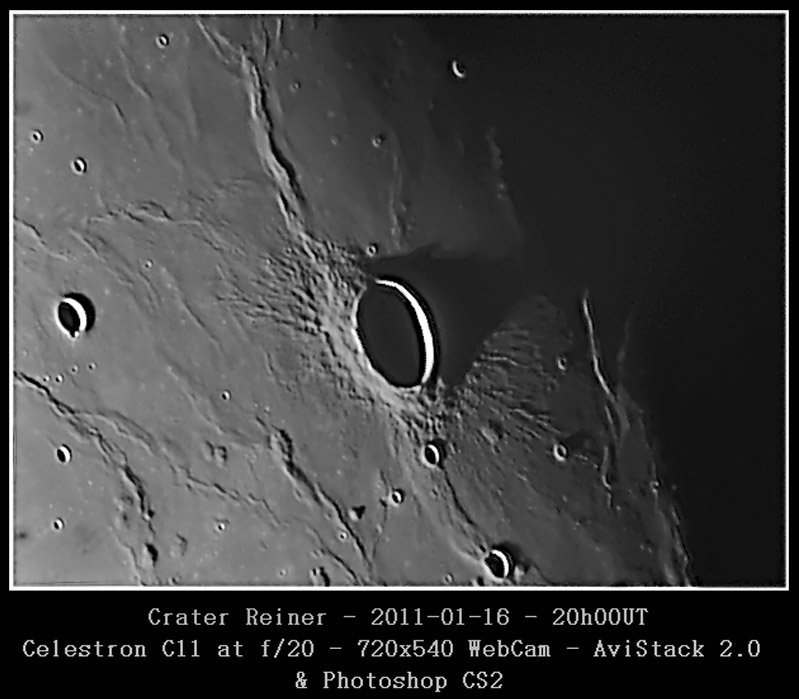 Reiner Gamma is such a famous feature that the crater the swirl is named after is usually hardly noticed. Markus restores interest with his great low Sun view. The long shadow of the crater itself looks like a profile of a castle, with spires everywhere. The small hills are outliers of the Marius Hills. Although there is absolutely no evidence of it at this low Sun the small crater in the 4 pm position from Reiner is right on top of a white swirl. This image shows that ejecta from Reiner crosses the swirl and therefore is younger than the swirl. Or the process that causes swirls works on ejecta too, and the swirls are possibly younger - not very definitive. Another interesting observation is that the radial ejecta does not extend equally in all directions. A vertical view from the LRO-WAC confirms this. There are two likely explanations - younger lava flows covered part of Reiner's near in ejecta, or Reiner formed by a low oblique impact with ejecta only going sideways, not in the downrange or uprange directions. Unfortunately, there are no rays visible from Reiner, so there is no ray evidence for an oblique impact. However, the crater is slightly elongated in the direction expected if it were formed by an oblique impact. The LRO-WAC image provides no evidence that some of the nearby lavas are younger than the others. So, with the images examined so far, we currently do not have compelling reasons to select between these two alternatives. What additional evidence can we look at to try to resolve the uncertainty?


Yesterday's LPOD: How Deep is That Hole? Version 2.0

Tomorrow's LPOD: The Moon is a Balloon