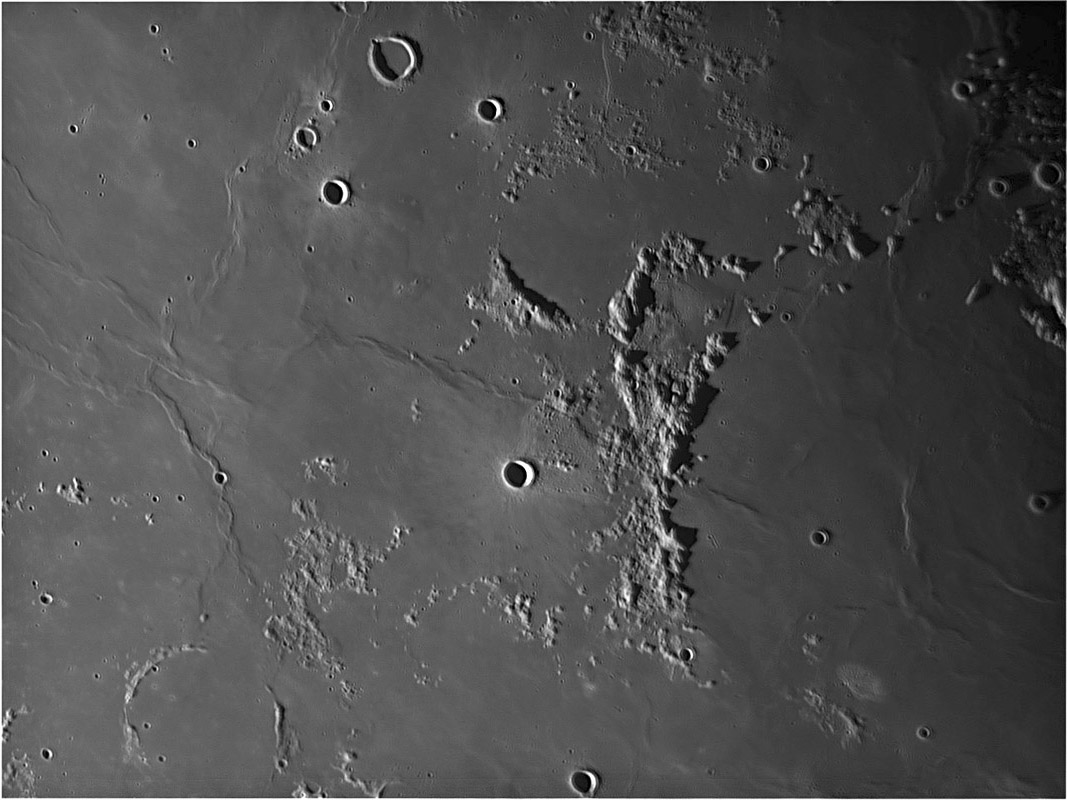 If the half crater rim of the Riphaeus Mountains were not in this image it would be hard to know where on the Moon it is. In this area of southern Oceanus Procellarum the mare lavas are thin and many relicts from earlier times protrude. Most conspicuous are the Riphaeus Mts, the western rim of an about 225 km diameter crater whose central peak area is marked by the short bright ridge at right center. The lava within this ancient structure is Mare Cognitum, where Ranger 7 smashed into the lunar surface. Another ancient and flooded crater remnant is partially bounded by the northernmost part of the Riphaeus, once knownas Boreus Mtns, and the curved chain just west, the erstwhile Urals. This relict crater has a designation, Euclides P. A third beautiful half rim is preserved at bottom left - the short mountain ridge on the east (right) looks different and seems to be too far east for a perfect circular rim. Another type of relict landform is represented by the bright and heavily cratered patches such as near the bottom right side of the image. This is called a kipuka, a pre-existing volcanic terrain that has been surrounded by younger lavas. Two more pieces are along the northern most parts of the Riphaeus, one is a slightly domed area just west of Boreus which is cut by a short segment of a linear rille, with narrower rille segments near the Boreus Mts. The other kipuka is adjacent to Euclides (get your atlas out) and has considerably more impact pits than the surrounding lavas. Most of these kipukas are red spots, a lava compositionally distinct from normal mare basalts. Also look for a number of likely volcanic swells in this area, and notice at top center another short rille. Great image, Claude!