Throwing Out the Washbowl with the Bath Water 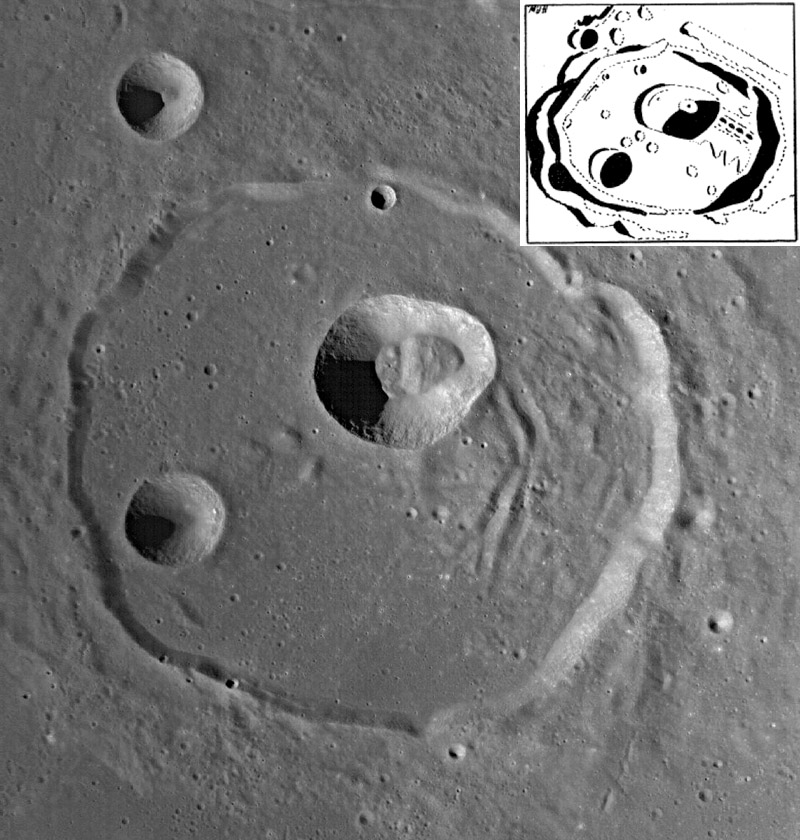 Percy Wilkins probably never imagined that his drawings made in the 1950s would someday be compared to high resolution spacecraft images, but it has happened. Wilkins and Moore (The Moon, p 228) state that on 3 April 1952 they observed the crater Cassini A with the 33" Meudon refractor. In the Journal of the British Astronomical Association, Wilkins uses essentially the same drawing (shown here) to illustrate his observation of Cassini and A, reportedly made with the 33" on April 21, 1953. Cassini A is the largest crater within Cassini. In The Moon this description appears of a feature inside A: "a white, very shallow crater within which is a most minute central pit, the whole strongly resembling a 'Washbowl', and named accordingly." The JBAA article says the shallow crater is about 2 miles wide. This high Sun LRO WAC image processed by Raf beautifully reveals the inside of Cassini A. There is no 2 mile wide crater inside A where Wilkins drew one, but there are three small ridges/ hills which perhaps could look like a shallow crater under the lighting conditions depicted in the drawing, and with less resolution than afforded by the spacecraft image. The "most minute pit" does not exist either, but the shadow from the topmost hill might have suggested a pit. For nearly 60 years amateur literature has been awash (sorry) with discussions and explanations of the illusive washbowl. In reality, the washbowl and its minute pit do not exist, but even if they did they would be of no geologic significance. Much more interesting is the reason for the elongated shape of Cassini A, which Raf and his colleagues earlier explained as a closely-spaced double impact. That is a reasonable hypothesis, or it possibly could have formed as an oblique impact. The origin of Cassini A is worth discussing.