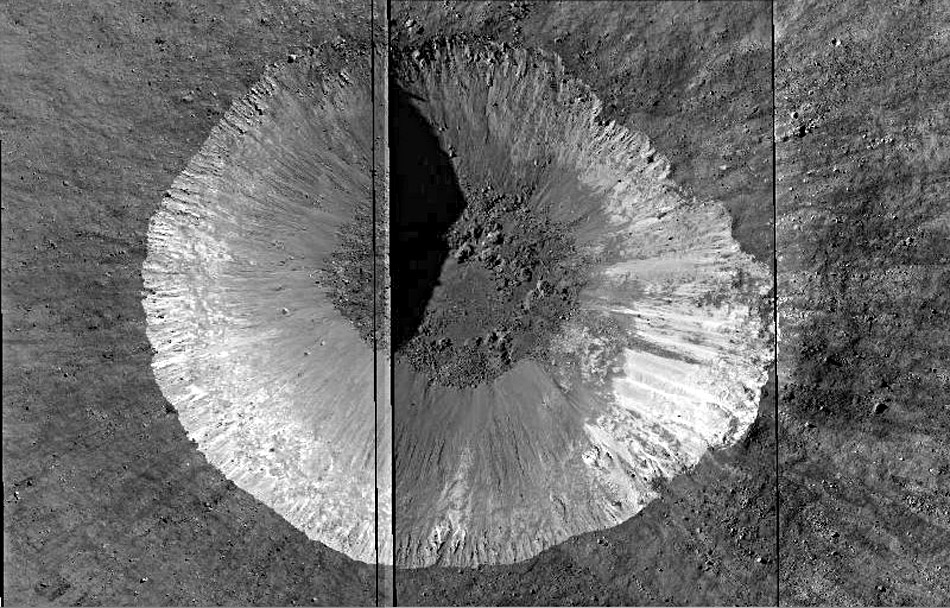 Do you recognize this famous 3.5 km wide crater? It was first noticed as being unusual in the early 1670s when observers didn't readily detect such small craters. Being so small it could only be famous for being bright, and this image shows that it does have a very sharp rim and appears quite young. You may notice something else about this image - the shadow in the middle doesn't belong there - apparently the automatic (I assume) compositing of Narrow Angle Camera images to make the QuickMap mosaic included one with a low Sun angle. But back to the actual crater, not the depicted one - have you figured it out yet? It is Cassini's Bright Spot on the floor of Deslandres. A peculiar aspect of CBS is that the bright ejecta is all to the east of the crater - see the upper right corner of this Minsk color image. Look closely at the Minsk view and you will see that the bright rays make a Vee opening to the east but other ray material goes in other directions. Here is a confirmatory Clementine view. The Vee-shaped pattern suggests an oblique impact (and the elongated 4.2 km east- west diameter hints at that) but rays open up in the downrange direction for an oblique impact and the bright rays here are in the wrong direction. Perhaps there is more happening here. The LRO image shows very bright material exposed in the eastern wall of CBS, and more to the southwest where the wall isn't covered by later gray talus. Is it possible that the CBS crater impacted into a geologic boundary with very bright material only on the east side? But why aren't there similar length gray rays? This mystery isn't solved yet.