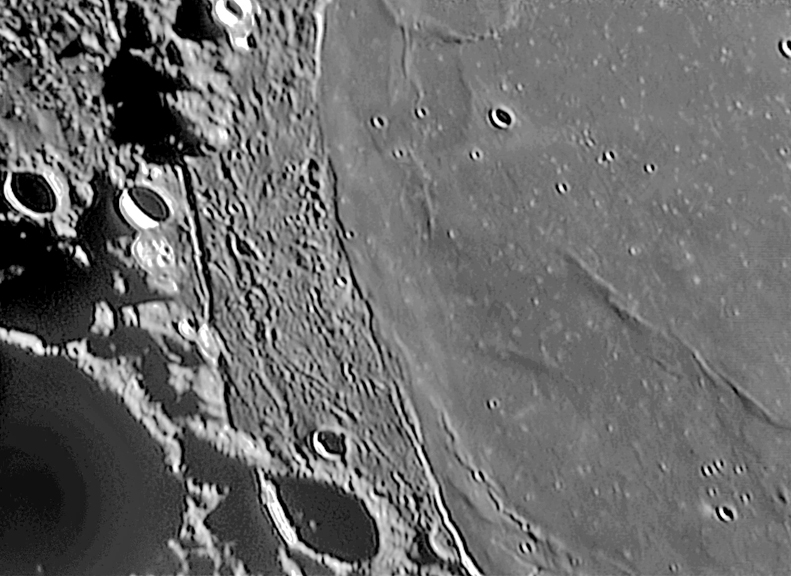 Imagine yourself sitting on the unnamed peak at top left about 3.6 billion years ago. You look out on a vast sunken plain - the original floor of the Humorum impact basin. Your mountainous perch is one of the ring rims of the basin itself, and the plain is covered with rough textured fallback debris such as still exists in the left third of Zac’s image. Then one night the view east is of an incandescent glow and the heat radiating into space makes the stars dance like water drops on a hot griddle. Mare Humorum lavas are erupting from fissures circling the basin, filling it with a lifeless sea of molten rock. The Earth is huge in the sky, causing vast tides in the lava sea. Waves lap on to the hummocky shore below your peak, with the viscous lava freezing the wave front before it crashes down and sloshes further up the shore. Where the lava stops is more that just a feathering up a gentle slope, for no hills can be seen protruding where the lava nears shore. In fact, a fault - pieces of which are visible at the north and south ends of the image - mark the scarp where the center of the basin has subsided under the weight of the growing mare pile. The show goes on for many nights - perhaps a few hundred million years - with frequent interruptions as random impacts create the tiny pits that now appear as faint white spots on the lava plain. It must have been a glorious sight.

Tomorrow's LPOD: King of the Farside