Lights in the Sky 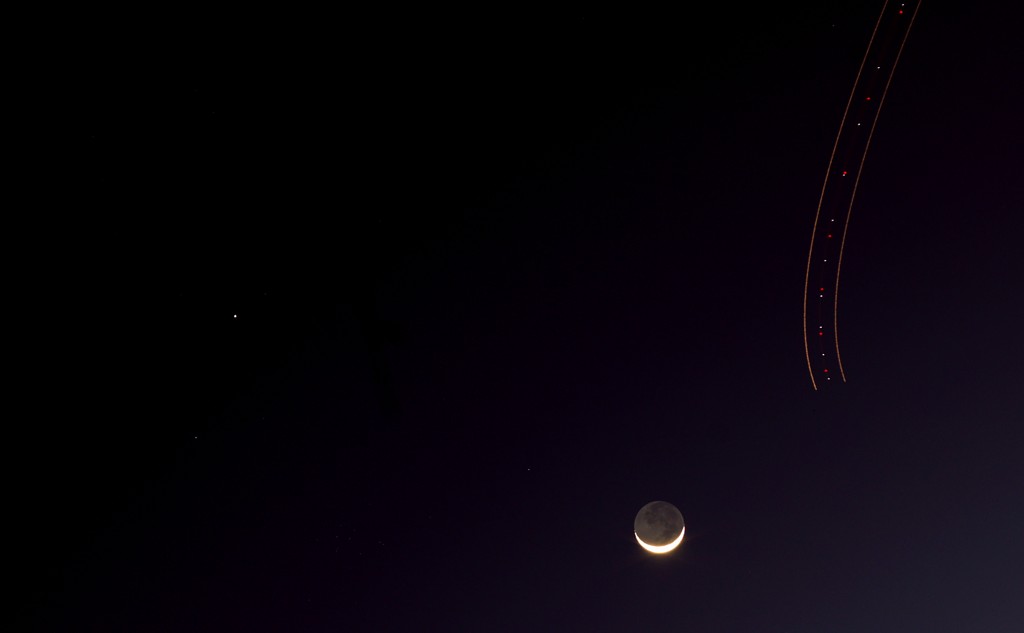 The sky is full of wondrous objects and mysteries. The Earthshined Moon and Saturn to its left are familiar pleasures, and the curved reddish “railway track” at upper left isn’t really much of a mystery, but it is delightful. Dennis was taking images of the conjunction of the Moon, Mercury, Saturn, Mars and Pleiades when a airplane flew through one of his 15 to 30 second exposures. I suppose the two “rails” are wing lights, but I am surprised they both look faintly reddish. I know that private planes have a green light at the tip of right wing and a red light on the other, but neither of these looks green. Are the white and red lights in the middle pulses from an anti-collision beacons? I am uncertain why the distances between the white and red flashes are different - do they flash at different rates? The separation distances between flashes is greater near the top of the image than near the bottom where the end/begining of exposure truncates the rails. Is the plane nearer Dennis where the flashes are close together or where they are far apart? If the flashes have a constant flash rate, wide separation would indicate a lot of movement between flashes, implying that the plane was near and rapidly changing its angular position. But the two rail lights are brighter at the end where the flashes are close together, implying that that end is nearest Dennis. Somebody will know the explanation and tell us, I hope. In the meantime, enjoy everything in the sky (except maybe clouds).

Unrelated message from Chuck: Tonight I had first light with my new (used actually) Intes MK-67 (6″ f/12 Mak). I just barely saw the Moon over the firestation across the street and under some low clouds. I observed from my doorway! I think I will be pleased with the scope although the image was yellow - presumably due to its lowness. I eagerly await tomorrow night.

Yesterday's LPOD: The Least Studied Area of the Lunar Nearside