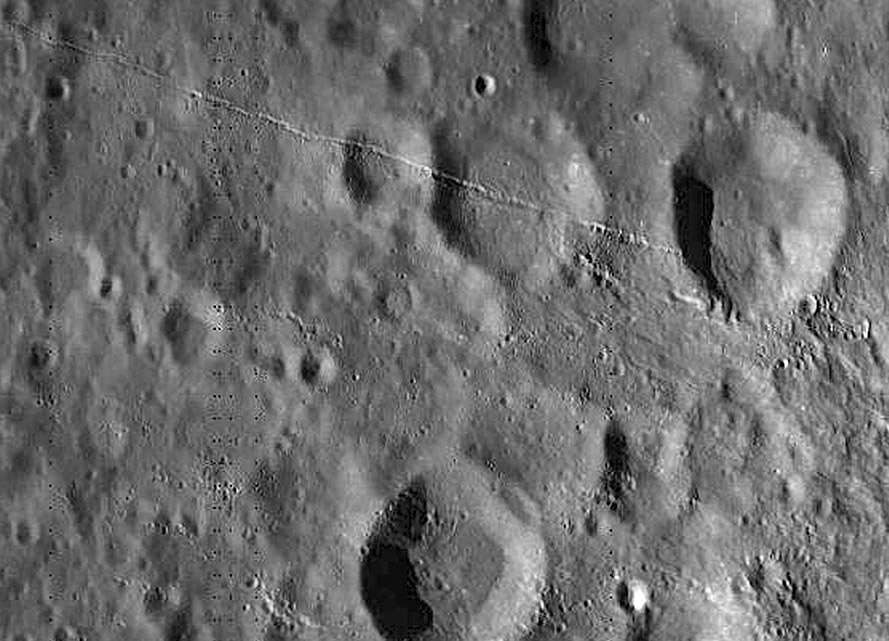 This is an image I could not identify, but didn't have to because it was posted by John Moore in the Moon-Wiki. The feature of interest isn't the named crater at the bottom but the long thin chain of craterlets. I doubt if anyone other than John can identify the region, so I'll tell you. The crater is the 25 km wide Marci on the farside at 22°N, 167°W. The visible length of the crater chain is 100 km, and there are about 100 craters - I counted them! - so their size is about 1 km. The key to figuring out what the feature is is a synoptic view that shows a broader region. Just beyond the bottom right is the very young crater Jackson, which is a spectacular oblique impact structure. The crater chain is radial to Jackson and appears to be right on the bright ray that defines the edge of the western side of the zone of avoidance of Jackson's ray pattern. Bright rays are commonly associated with secondary craters, but this tightly spaced secondary chain is unusual. It will be interesting to look at WAC images to see if a similar long chain is on the eastern edge of the zone of avoidance.

Tomorrow's LPOD: Swirled Up with Christmas