Moderate Sun Over a Magnificent Crater 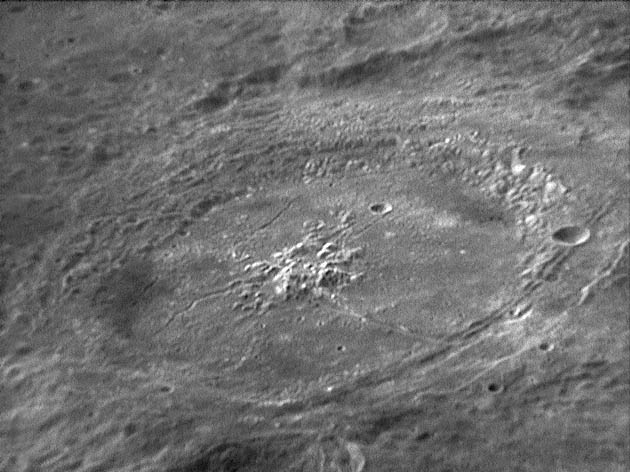 One of my first publications was a drawing of Petavius made with Dale Cruikshank’s 12" reflector. It was exciting to observe the small rilles on the floor, and even more so the next day when I realized that the rilles were not depicted correctly on existing maps. Now the exquisite imaging of Wes Higgins and other skilled observers removes the greatest uncertainty of visual observing - accurately describing delicate details. Petavius is a floor-fractured crater (its uplifted central region, rilles, dome and dark pyroclastic deposits are all evidence), but its largest rille is unique. It is much wider than typical rilles and is very straight. No one has every offered a convincing explanation of its uniqueness and I don’t have one. Some rilles are surface expressions of dikes that carried magma upward, and others mark areas of flexure (bending) but those don’t seem to be the case for this large rille. A second bizarre rille or parallel ridges extends along the western rim of Petavius. This curved ridge pair and the straight rille intersect so they must be related in some way. Another odd feature of Petavius is the flatness of its southwestern and southern wall. It looks like these sides of the rim are out of roundness - in other words, the widening of the wall is associated with the rim being larger and non-circular. How did that happen - who knows? Note that most high quality images are taken near the termnator, but Wes’ image shows that great detail can also be captured under high sun illuminations. Everyone should try it!

This is one of the lost LOPDs originally published June 14, 2005.